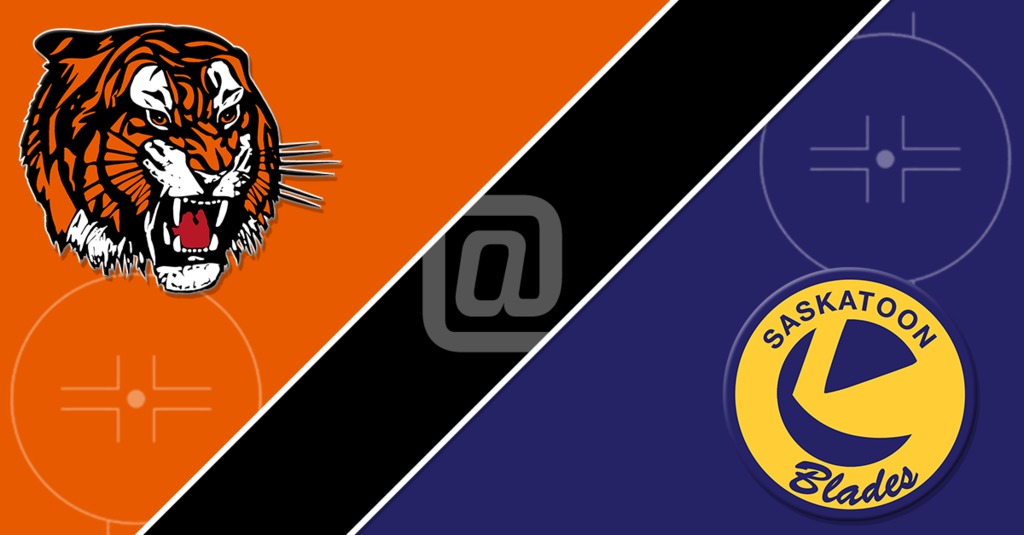 The Medicine Hat Tigers came out flying tonight against the Saskatoon Blades to beat them 3-2 and sweep the regular season series 4-0.

Gary Haden scored a beautiful goal on a play from Elijah Brown and Jaeger White to get the Tigers on the scoreboard early in the first period.

Within minutes of Haden’s goal, the newest member of the Orange and Black Bryan Lockner scored to double the Tigers’ lead. Lockner was traded to the Tabbies earlier today and has now scored 4 goals in his last 4 games played. His goal tonight was assisted by Kristians Rubins and David Quenneville.

In the dying minutes of the first period, the Saskatoon Blades managed to beat Tigers’ netminder Jordan Hollett to cut the lead to 1. Braylon Shmyr found the back of the net and the frame ended with the Tabbies leading 2-1.

A scoreless second period saw the first penalties of the game, but neither team could capitalize on their power plays.

With less than half of the final frame played, Quenneville scored seconds after a Tigers power play to give the Tigers a 3-1 lead. Dylan MacPherson and James Hamblin picked up the assists on Quenneville’s goal.

With 15 seconds left on the clock, Blades forward Chase Wouters found the back of the net to cut the Tabbies lead to 1. But the Blades were unable to find an equalizer and the game ended 3-1 for the Tigers.

Hollett turned aside 31 of the 33 shots he faced; while Blades rookie goaltender Nolan Maier stopped 43 of the Tigers 46 shots.

The Tabbies are now 23-16-3-0 and will face the Regina Pats Friday for the 3rd game of their 4 game road trip.