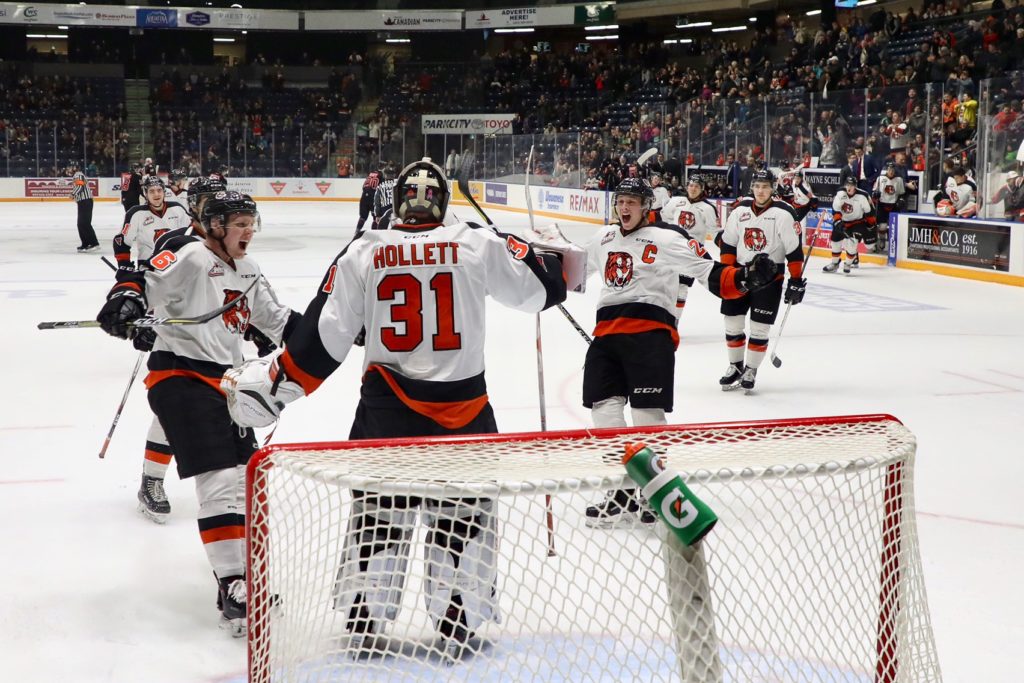 The Medicine Hat Tigers gave everything they had Saturday night to beat the visiting Moose Jaw Warriors 5-3.

Midway through the second period, a hit to the head from Warriors Barrett Sheen sent Tigers rookie defenceman Joel Craven to the ice. Craven needed medical attention and was escorted off the ice by his teammates and trainer Mikki Lanuk.

After that the momentum of the game shifted in the Tigers’ favour who gave everything they had to win the game.

Warriors forward Brayden Burke opened the scoring by tapping in a cross ice pass from Kale Clague. The first period ended with the visitors leading 1-0.

Early in the middle frame on a play from Ryan Jevne, Ryan Chyzowski redirected David Quenneville’s shot from the point to tie the game up at 1.

Quenneville tied the game back up on the power play with a rocket from the point. Jevne and Chyzowski picked up the assists.

Moments later while still on the power play, James Hamblin gave the home team their first lead of the night. Jevne’s shot bounced off Mark Rassell before Hamblin picked up the rebound in the slot to light the lamp.

Less than two minutes into the final frame, Rassell extended the Tabbies’ lead when he cleaned up the rebound in front of the net. His linemates Hamblin and Henry Rybinski picked up the assists on the play.

The two Eastern Conference rivals battled back and fourth in the third period before Ryan Peckford cut the Tabbies’ lead to 1 by beating Jordan Hollett blocker side.

In the final two minutes of the game, Warriors netminder Adam Evanoff headed to the bench to give his team an extra attacker. Quenneville managed to fire the puck into the empty net but the call was reversed due to the Tigers being offside.

Quenneville redeemed himself by firing the puck into an empty net with 2 seconds left on the clock sealing a 5-3 victory for the home team.

The Tigers are now 26-19-5-0 and will depart this week for a 4 game BC road trip starting Tuesday night in Kelowna.