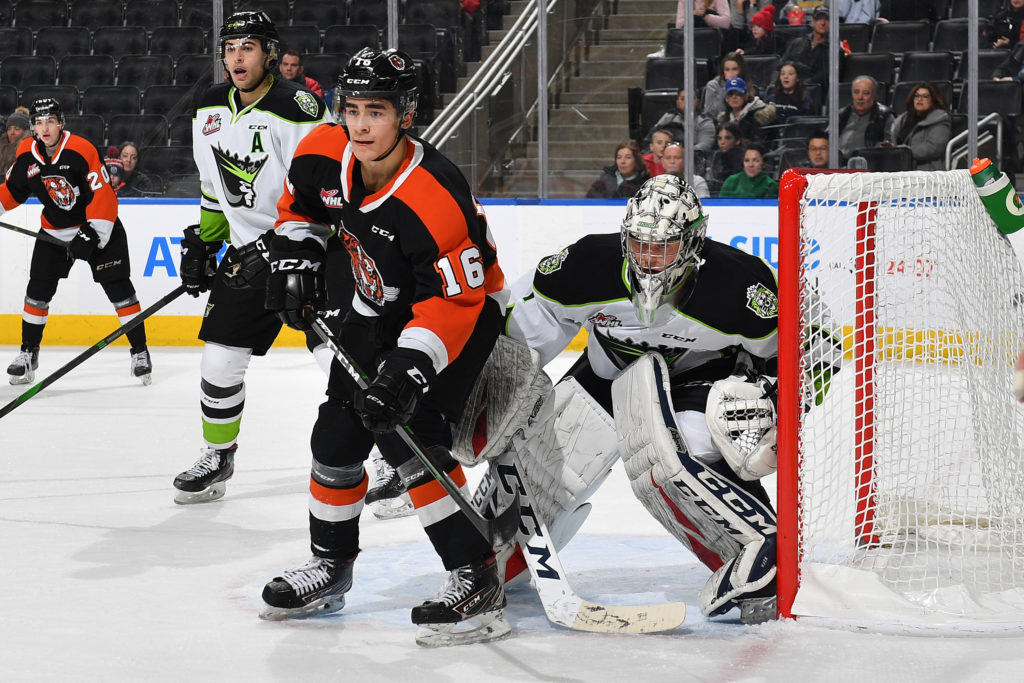 Medicine Hat, AB — The Medicine Hat Tigers faced off with the Edmonton Oil Kings in a battle of the top teams in the Central Division Sunday afternoon and they were bested 4-2 by Edmonton.

Tied 2-2 heading into the final frame, the Oil Kings scored on a power play to take the lead midway the period. Goaltender Mads Søgaard left the net with just over two minutes to play to allow the Tigers an extra attacker in hopes of finding the equalizer. Unfortunately the Oil Kings won possession of the puck and scored on the empty net to take the game 4-2.

Defenceman Matthew Robertson opened the scoring just under four minutes into the game to give the Oil Kings an early 1-0 lead. Afterwards, the Tabbies began to build pressure and with less than seven minutes remaining in the first frame they tied the game. Lukas Svejkovsky collected the puck down low, skated it towards the net, shot it off the far post and in to make it 1-1. Daniel Baker assisted on the play.

In the second stanza, the Tigers and the Oil Kings each scored to keep the game tied. Just under four minutes into the period, Svejkovsky wrapped around the net to score his second of the night and his 14th of the season giving Medicine Hat their first lead of the night. Linemates Corson Hopwo and James Hamblin collected the assists on the play.

Midway through the period, Edmonton’s Ethan McIndoe was awarded a penalty shot and despite making a great move, his shot hit the post. The Tabbies held onto their 2-1 lead until the final 30 seconds of the frame when Oil Kings leading scorer Riley Sawchuk scored to tie the game up at 2 apiece.

In the final stanza Sawchuk scored twice for a natural hat trick and to help Edmonton win 4-2. His second goal of the night was scored on the power play and his final goal was an empty net goal late in the game.

The Orange and Black are now 29-13-1-1 and they will travel to Saskatchewan later this week to take on the Saskatoon Blades Friday and the Prince Albert Raiders Saturday.