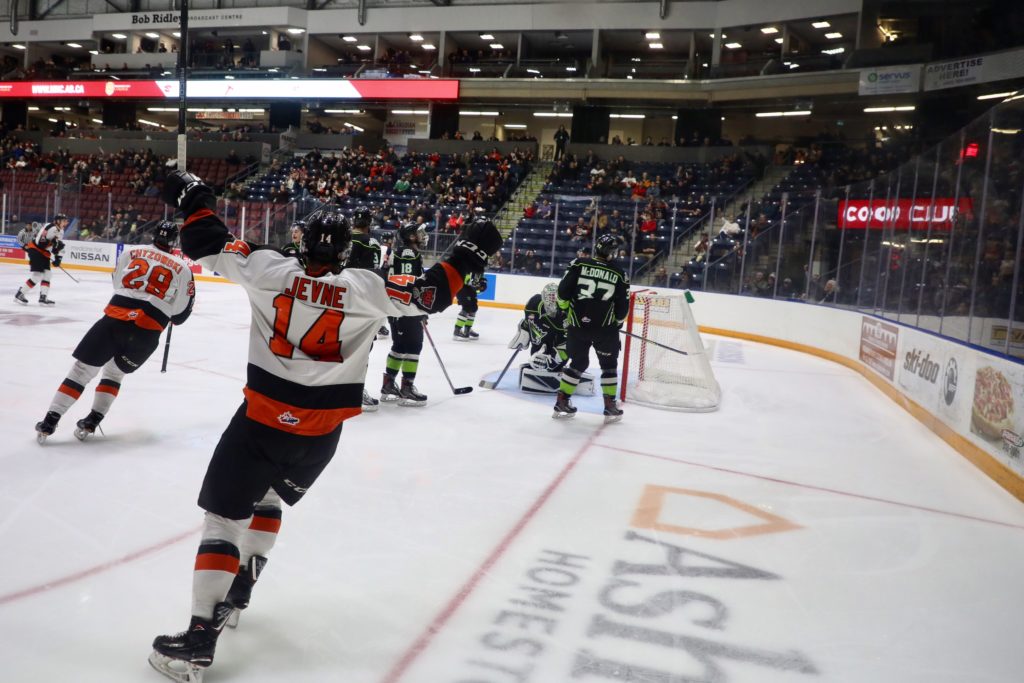 Tyler Preziuso returned to the lineup hungry for a goal and opened the scoring for the home team by burying Ryan Chyzowski’s rebound less than three minutes into the game.

Oil Kings’ Trey Fix-Wolansky tried to respond for his team, but Bullion denied him.

Midway through the first period, David Quenneville doubled the lead for the home team by firing in a shot from the point on a play from Mark Rassell.

In the last few minutes of the frame, Quenneville walked the puck up from one end of the ice to the other before ripping home a shot that was turned aside by Oil Kings goaltender Josh Dechaine. Luckily, Chyzowski was on the doorstep and able to bat in the rebound.

With less a minute remaining in the opening period, Rassell danced through Dechaine to light the lamp on the penalty kill and send his team to the dressing room leading 4-0 after 20 minutes of play. James Hamblin picked up the assist on Rassell’s goal.

The Oil Kings came out on a mission in the middle frame firing 13 shots on Bullion but he shut them out.

With less than half of the final period to play, Gary Haden forced a turn over and took a shot, Elijah Brown tried to score on the rebound but Dechaine turned it aside. Jaeger White then tried his luck before Haden buried White’s rebound.

With 3 seconds left on the clock, Josh Williams fired in a wrist shot from the slot to beat Dechaine top corner on his blocker side. Brown and Trevor Longo had the assists.

Dechaine stopped 33 of the Tabbies’ 39 shots.

The Tigers are now 27-22-7-0 and will host the Calgary Hitmen Friday night at the Canalta Centre.