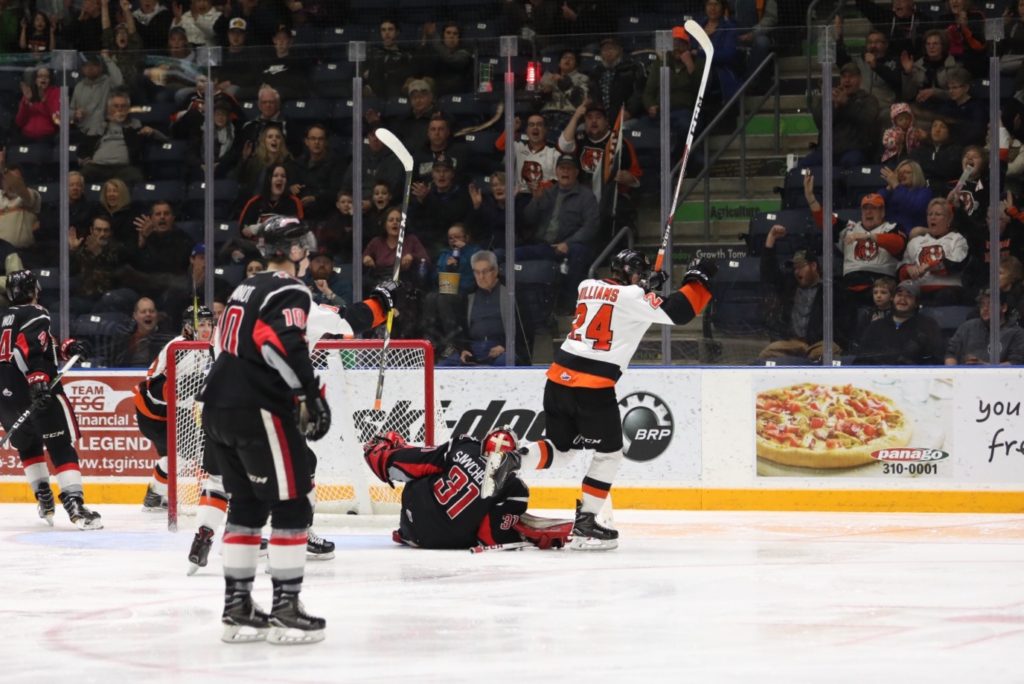 Medicine Hat, AB — With illness creeping into the Tigers lineup, Tuesday night had the team playing one man short despite the return of Zach Fischer and John Dahlstrom to the lineup. James Hamblin was another victim to illness, the 7th it seems in the past week. Medicine Hat’s defense also has taken a hit, seeing 4 of their veteran D hitting the shelf with injury or illness. Even still the Tigers have found ways to win but their effort was outdone by a good Moose Jaw Warriors squad in a 6-3 defeat.

It was an understandably uncharacteristic night for the ailing group’s offence, as Moose Jaw held the Hat to just 22 shots while putting 36 on Tigers goaltender Michael Bullion. That said, the Tabbies still kept the pace by cashing in on the chances they earned.

Dahlstrom got the scoring started in his return. The 19-year-old Swede missed three games with mumps, but looked in full form when he fired a loose puck into the roof of the net to lift the Tigers to an early lead.

Any momentum gained by the goal was quickly snuffed out, however, as Chad Butcher found himself in the box for high sticking and the Warriors took advantage. Thomas Foster finished off the scoring play for his 16th of the season midway through the first — and just 14 seconds into the man advantage — then Brett Howden netted his 31st to take over the lead early in the middle frame.

The Tigers regained some life when Mason Shaw ripped a shot past Warriors netminder Zach Sawchenko for Medicine Hat’s third power play goal in as many chances, but once again Moose Jaw had an answer.

The Tabbies continued to chip away in the third, looking to recreate their comeback magic from the last time the Warriors were in town —when Medicine Hat turned a four-goal deficit into a 5-4 victory. But Howden quickly prevented any hope for a turnaround with his second of the night, just 12 seconds into the third period.

Tigers prospect Josh Williams sent the fans home happy with his first career goal — chipping a puck under Sawchenko in his fourth WHL game to cut the deficit to a pair — but it would be all Medicine Hat would muster.

Howden completed the hat trick late in the third period to ice the game, while Sawchenko finished the night with 19 saves to push Moose Jaw to 35-17-7-1 on the year. Medicine Hat fell to 42-18-1-0 with the loss.

The Tigers return to the ice Friday night in Calgary against the Hitmen. The puck drops at 7 p.m