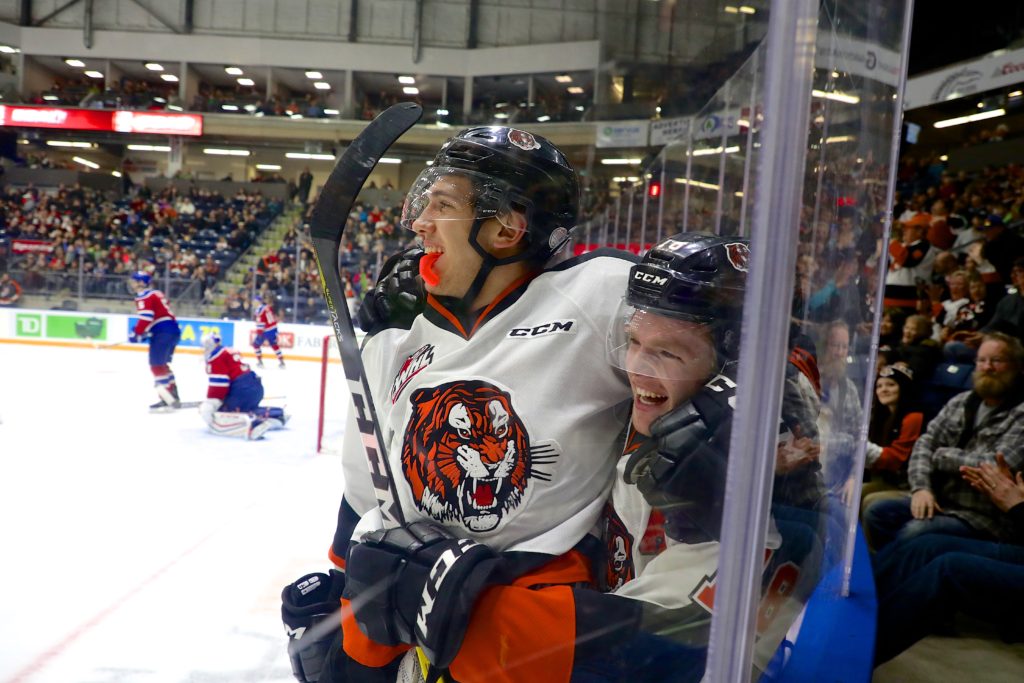 Edmonton, AB — The Medicine Hat Tigers looked to build on momentum from Friday night’s game when they shelled the Edmonton Oil Kings for 9 goals at the Canalta Centre. However it was a different Edmonton team that came out Saturday. Michael Bullion got the start for the Tigers and Zach Fischer was a late scratch from the game as he went out with a lower body injury, causing Ryan Chyzowski to draw into the lineup.

The opening frame would have looked to be a dominating period by the Tigers on paper as they fired 21 shots towards Edmonton starter Patrick Dea. However it looked like the Tigers game plan was to pepper the Oil King netminder from anywhere and everywhere. Medicine Hat fired puck from the side wall, the corner and even centre ice to try and break the game’s opening goal but nothing solved Dea. Mark Rassell and Steven Owre had back to back breakaways but were foiled by Dea as both tried to go left and then right on their dekes. The game’s first goal was scored late on a Tigers 4 on 3 power play, Max Gerlach potted his 32nd of the season with assists going to a red hot Matt Bradley and John Dahlstrom. Rassell would take a late penalty causing the Tigers to be on the penalty kill to begin the second period.

The penalty kill to start the period was beneficial for the Tigers as hard work from Ryan Jevne and James Hamblin netted Hamblin his 18th of the season and his 4th shorthanded goal on the year. Jevne poked a puck past the Oil Kings defender sliding it over the Hamblin who shot once and was stopped by Dea but followed up the rebound for the goal. Just before the midway point in the period a high sticking call to Will Warm put the Tigers on the power play. John Dahlstrom potted his 29th of the season, also on a rebound. The big Swede followed up a Mason Shaw turn around shot and while on his knees buried the goal and a 3-0 lead. Medicine Hat would have a great penalty kill in the period, stopping back to back power plays with limited shots on Bullion. Medicine Hat lead 39-16 on the shot clock heading to the final frame.

The third period was crucial for the Tigers as they played some scoreboard watching with Lethbridge in action tonight against Calgary. With a Canes loss tonight and a Tigers win the Tigers would clinch their first Division title since 2007. But that celebration would have to wait 20 minutes. Special teams continued to be a big part of the night for Medicine Hat with James Hamblin scoring his second of the night at 19th of the season on a early period power play. Hamblin was in the right spot as he buried a rebound in close into a yawning cage. A few minutes later Tyler Preziuso and Kobe Mohr decided to drop the gloves in a spirited bout, give the take down to Prez. As the minutes slowly went to zero the Tigers played a flawless game and gave Michael Bullion his 3rd shut out on the season and a Central Division crown.

Medicine Hat will enter the final week of the season to take on Red Deer and Lethbridge at home while playing 1 game away from the Canalta Centre, a Friday night showdown with the Hurricanes.