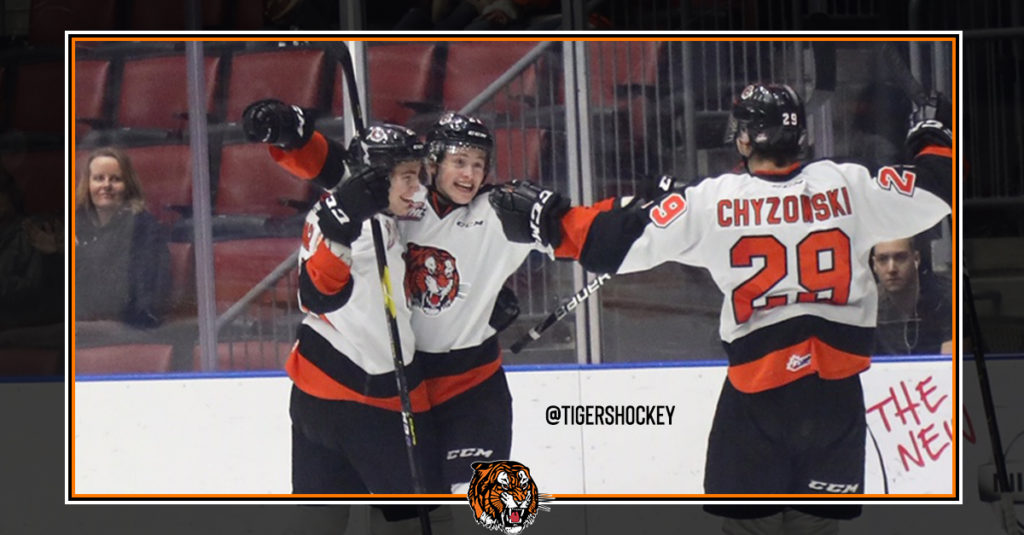 Medicine Hat, AB — For the 40th time in franchise history, the Medicine Hat Tigers have clinched a playoff spot after defeating the Red Deer Rebels 7-4.

Less than a minute into the second stanza, Zak Smith scored for the Rebels to retake the lead but Chyzowski tied it right back up to 2 goals apiece. Chyzowski defected Cole Clayton’s point shot to score his first goal of the night. Kemp also assisted on the play.

On the Tabbies’ second power play of the night, Kemp scored from the slot to get his first of the evening. Hamblin and Linus Nassen combined on the play.

Kemp scored a similar goal a couple of minutes later to get his second of the night. This time it was set up by Daniel Baker and Chyzowski.

Josh Tarzwell scored midway through the period to cut the Tigers’ lead to 4-3 but once again the Tabbies quickly responded to extend their lead.

While on the power play, Ryan Jevne put the puck on the tape of Chyzowski’s stick for Chyzowski to score his second of the night and 26th of the season. Hamblin also assisted on the play.

In the final frame, Chyzowski set up Kemp to score his third of the night and his 31st of the season. After Kemp’s hat-trick goal, Rebels netminder Ethan Anders left the game and he was replaced by Byron Fancy. Anders stopped 23 of 29 shots faced.

Rebels leading scorer, Brandon Hagel scored midway through the final frame before Logan Christensen scored to seal the 7-4 Tigers’ victory. Hayden Ostir and Elijah Brown set Christensen up to score his 7th goal of the season.

Søgaard made 24 saves on 28 shots faced during the contest.