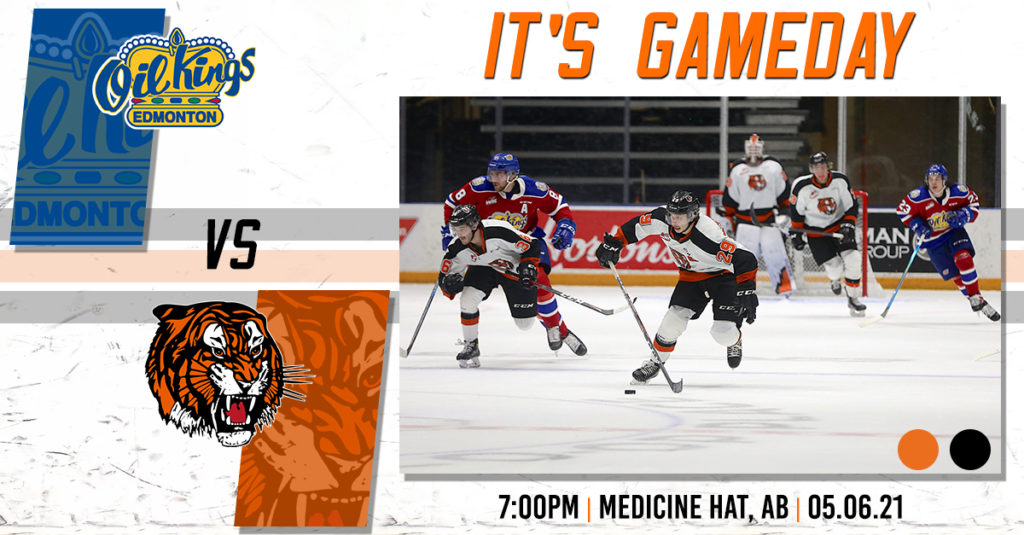 The Story Coming In
The Medicine Hat Tigers are looking to close out the 2020-2021 campaign out on a high note by taking down the Edmonton Oil Kings in the 6th and final meeting between these two top teams. Edmonton is the only team the Tigers don’t have a victory against this season. The Orange and Black took two of three games vs the Lethbridge Hurricanes last weekend and will be trying to add to that momentum tonight. Leading the way offensively for the Tigers was Ryan Chyzowksi who recorded his third career hat trick on Sunday. Brett Kemp and Lukas Svejkovsky also added multi-goal games to help the Tigers.

The Edmonton Oil Kings have had a bit of a wild ride this past week. After taking out the Calgary Hitmen by a score of 8-3 on Friday, April 30, EOK lost only their 2nd game in regulation this season dropping a 4-2 decision to the last place Red Deer Rebels on May 1. The Oil Kings were able to right the ship with a 3-2 overtime win in Edmonton on Tuesday as they closed out their season series with the Hurricanes. Josh Williams led the charge for Edmonton as notched his career hat trick on the 30th vs the Hitmen and then chipped in with two more in the win over the Hurricanes.

Tigers vs. Oil Kings
This will be the sixth meeting of the season between these two rivals, with Edmonton having come out on top in the first five games this season. Medicine Hat is 9-12-2-0 vs the Oil Kings in the past five years, but Medicine Hat has the edge playing at home going 6-3-2-0 since 2016. Special Teams will likely play a factor tonight as Medicine Hat is boasting the top powerplay in the country, scoring on 39% (30/77) of their opportunities. The Oil Kings also have a top 10 powerplay, currently sitting 7th in the WHL at 27.6% (29/105). The Tigers sit 6th in the WHL in penalty kills having successfully killed of 82.9% of short handed situations, while the Oil Kings sit 2nd with a 85.7% kill rate.

View from Edmonton
The Edmonton Oil Kings will be looking to close out their 2020-2021 season on a winning note after having already claimed the Central Division Crown this season with a record of 19-2-0-1, while averaging 4.59 goals per game, tops in the WHL. Leading the way offensively for the Oil Kings is Josh Neighbours who has 33 points in 19 games (9G, 24A) and Josh Williams who has 30 points in the 21 games (17G, 13A). Jalen Luypen (16G, 13A), Carter Souch (6G, 21A) and Dylan Guenther (12G, 12). Guenther has missed the last 10 games of the Oil Kings season as he is in Texas representing Team Canada at the U18 Hockey Tournament.

Tigers Talent
Tonight marks the end of era for three Medicine Hat Tigers. Tigers overage players Brett Kemp, Cole Clayton and Ryan Chyzowski will suit up for their final games in the Orange and Black. All three players personify what it means to be a Tiger and have led by example not only in this unusual season, but throughout their careers with Medicine Hat. Brett Kemp currently leads the Tabbies in scoring with 12 goals and 19 assists, while defencemen Cole Clayton is currently 2nd in team scoring with 9 goals and 21 assists. Tigers Captain Ryan Chyzowski rounds out the top three with 11 goals and 18 assists. All three overage players have appeared in all 22 of the Tigers games this season.

Captain’s Corner
Returning to the Tigers for his overage season is first year Captain, Ryan Chyzowski. Chyzowski, a former 1st round bantam draft pick has played his entire career for the Tigers appearing in 279 regular season games for the Orange and Black. The Kamloops, BC native is third in team scoring with 11 goals and 18 assists through 22 games this season. Chyzowski crushed his career best totals in 2019-2020, notching 34 goals and adding in 35 helpers for 69 points. Chyzowski is a great 200 foot player with a very quick release and a great work ethic.