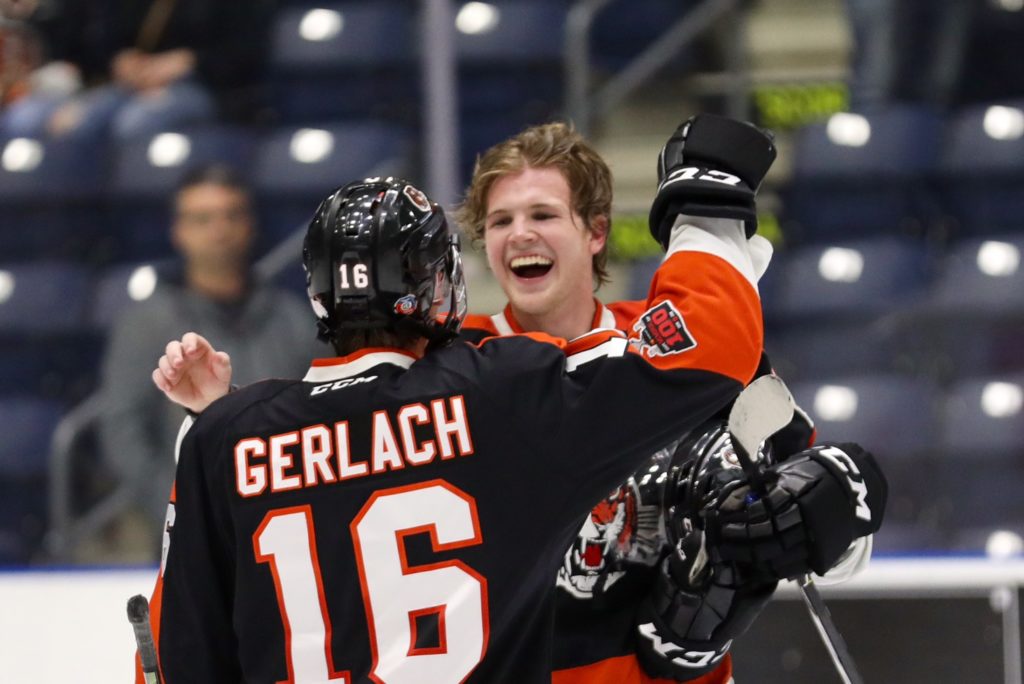 The Medicine Hat Tigers won the game, but lost a lot more on Friday night at the Canalta Centre.

While Linus Nassen played the hero in a 4-3 overtime comeback against the Victoria Royals to snap a three-game losing skid, Hat netminder Jordan Hollett was forced out of the contest after taking a knee to the head from Igor Martynov late in the first period. Hollett left the ice under his own power, but did not return to the bench.

The Royals starting garnering momentum right off the opening draw. Chaz Reddekopp broke open the early stalemate just over six minutes into the first, beating Hollett in 4-on-4 action with Medicine Hat’s Gary Haden in the box for goaltender interference and Victoria’s Dino Kambeitz out for tripping.

While overage forward Tyler Soy doubled up on Victoria’s lead six minutes later by beating Hollett off the rush, Haden stepped up and gave the Tigers some life with his second goal in as many games and eighth of the season.

The 18-year-old Airdrie product outmuscled a pair of Royals defenders in the neutral zone to force a breakaway, then beat Victoria netminder Griffen Outhouse on the ensuing opportunity.

Victoria looked to tack on with a 5-on-3 chance few minutes later, though the goal was immediately waved off due to contact with Hollett. But the Royals found their insurance marker a few minutes later when Martynov crashed into Hollett.

Martynov was credited for his 10th of the year after cutting through the crease and beating Hollett just as he drove a knee into the Tiger netminder’s mask.

While the play drew the ire of the Tigers bench as well as most of the 3,014 fans in attendance, the goal stood after a lengthy review and Martynov was not penalized.

Michael Bullion entered the game in relief of Hollett — who stopped five of eight shots in just less than 19 minutes of work.

While the Tigers mounted a comeback effort in the second period, shelling Outhouse with 12 shots in the frame while allowing just four, the Royals goaltender had an answer for every one to preserve a two-goal lead after 40 minutes.

But Medicine Hat carried the momentum into the final frame and Mark Rassell finally broke through Outhouse’s defences to cut the lead to one. The Tigers captain broke in on the rush and beat Outhouse over the glove for his team-leading 25th of the season, setting the stage for David Quenneville to knot the game up on the power play.

With Matthew Smith in the box for tripping, Quenneville ripped a point shot through Outhouse to force overtime with his eighth goal of the year, bringing life to the stands at the Canalta Centre and drawing one of the loudest chants of the season.

The Tigers continued to lay on early in the overtime frame before Nassen jumped in on the rush and redirected a puck past Outhouse to secure the victory with the first goal of his WHL career.

Bullion collected the win after turning aside 12 shots in relief of Hollett to push the Tigers to 16-10-0-0. Outhouse settled for the 37-save loss, dropping Victoria to 18-9-3-0.