TIGERS COME UP SHORT IN 7-3 FALL TO RAIDERS 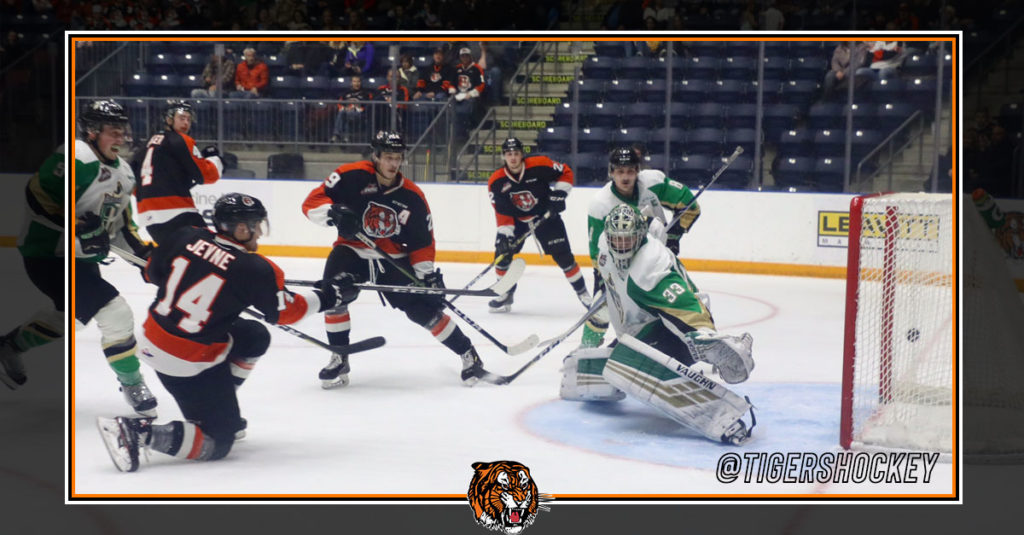 Medicine Hat, AB — The Medicine Hat Tigers were unable to complete the comeback and fell 7-3 to the Prince Albert Raiders tonight.

Prince Albert forwards Ozzy Wiesblatt and Brett Leason scored in the first period to give the visitor’s a 2-0 lead after 20 minutes of play.

Parker Kelly scored early in the middle frame before Leason scored his second of the night shorthanded.

The Tigers continued to battle despite being down 4-0. Logan Christensen had the puck and got tangled up with two Raiders defencemen before Josh Williams pounced to pick it up and backed handed it past Raiders’ goaltender Ian Scott to get the home team on the scoreboard.

Early into the third period on the power play, Bryan Lockner skated the puck in and beat Scott through the five hole. Tyler Preziuso and Dylan MacPherson combined on the play.

Moments later, Ryan Jevne buried Daniel Baker’s rebound to make it a 4-3 game. Preziuso picked up his second assist of the night on the play.

Unfortunately, the Raiders responded to the Tigers’ push by scoring three quick goals. Brayden Pachal, Kelly and Aliaksei Protas were the goal scorers.

Jordan Hollett left the game after the Raider’s 7th goal. He turned aside 24 of 31 shots in 52:21 played. Mads Sogaard relieved Hollett and stopped all 2 shots faced.