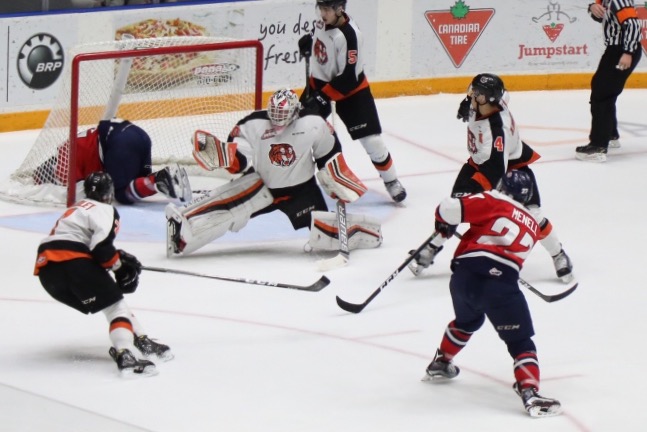 The Medicine Hat Tigers have been pushed to the brink.

An ugly bounce of the stick of Ty Schultz left the Tigers staring down a 5-4 loss to the Lethbridge Hurricanes and a 3-2 deficit in the Eastern Conference semifinals on Friday night at the Canalta Centre.

Hurricanes defenceman Brennan Riddle was credited for his first of the playoffs on a shot that careened of Schultz’s stick and into the back of the net, holding up as the game-winner and driving a dagger into Medicine Hat’s hopes of reaching the third round.

It was an uphill climb from the get-go. While Mason Shaw attempted to set an early tone with a stern body check on Tyler Wong, the Hurricanes forward immediately answered back with his third goal of the series to push the Tabbies onto their heels.

But Medicine Hat shoved right back during 4-on-4 action. Texan forward Max Gerlach potted his second goal in as many nights with Steven Owre and Jordy Bellerive in the box for a pair of tripping calls, and the barn-burning period was set into motion.

Lethbridge regained the early lead just two minutes after Gerlach’s marker — with Ryan Bowen racing in all alone and beating Michael Bullion to the twine with a nifty backhander — then Tigers captain Clayton Kirichenko struck back with his fourth of the playoffs, also on an extended 4-on-4.

Medicine Hat dug themselves into a hole to end the period however, as Owre was booked for covering the puck in the faceoff dot and Wong went back to work. It only took four seconds for the overage Hurricane to net his second of the period and send his team into the intermission with an advantage.

Bullion settled into his net for another stellar second period, coming up with a series of highlight reel stops to allow his team a window back into the game — and Gerlach made good on the opportunity.

The 19-year-old sniper took a 3-on-1 pass from James Hamblin and ripped the rubber over the arm of Hurricanes goaltender Stuart Skinner to snuff out Lethbridge’s early momentum and even things back up after 40 minutes.

But penalty trouble paved the way to third-period disaster yet again. A questionable tripping call to defenceman Ty Schultz led to Ryan Vandervlis’ timely go-ahead goal early in the third.

The disappointments continued for Schultz a few minutes later when the game-winning goal tipped off his stick and past his goaltender — and this time the Tigers were unable to respond in kind.

David Quenneville narrowed the gap to one with a power play goal from the point, but a late charging penalty to Mason Shaw snuffed out any momentum gained and the Hurricanes skated off to victory.

Bullion finished the night with 22 stops but settled for his third loss in four games, while Skinner held the Tigers at bay with a 37-save outing to secure another series lead.

The Tigers will look to stave off elimination in Game 6 on Sunday in Lethbridge. Puck drop is slated for 6