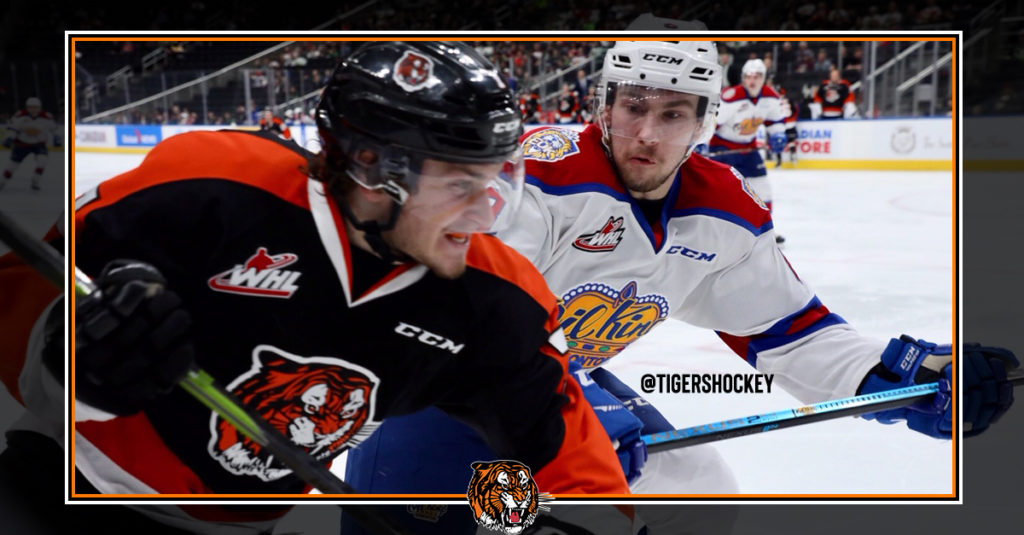 Medicine Hat, AB — Despite scoring twice in the final frame, the Medicine Hat Tigers fell 5-4 to the Edmonton Oil Kings in game five of the Eastern Conference Quarter Finals.

The Tigers were down 4-1 after 20 minutes of play and after trading goals in the second period, the tenacious Tabbies pushed back in the final frame to make it a 5-4 game.

Ryan Chyzowski had a three point night (2G, 1A) while rookie goaltender Mads Søgaard stopped 34 of 39 shots faced in the losing contest.

The Tigers and the Oil Kings traded goals in the first minute of the game. Oil Kings Andrei Pavlenko scored 16 seconds into the contest before Linus Nassen responded for the Tigers. Nassen’s goal was assisted by Brett Kemp.

Edmonton then proceeded to score three goals before the end of the first period. Andrew Fyten, Trey Fix-Wolansky and Scott Atkinson were the goal scorers.

In the second stanza, Chyzowski deflected Trevor Longo’s shot into the net to score his first of the night. Chyzowski’s goal was also assisted by Dylan MacPherson.

Midway through the frame, Fix-Wolansky scored his second of the night to make it 5-2.

On a play from Tyler Preziuso, James Hamblin scored the first goal of the Tigers’ final push. With the momentum shifted, Chyzowski scored his second of the night just over three minutes later. Chyzowski’s goal was assisted by Longo.

The Oil Kings now lead the series 3-2 as both Central Division rivals will return to Medicine Hat to play game six on Sunday night at the Canalta Centre. The game starts at 6 PM.