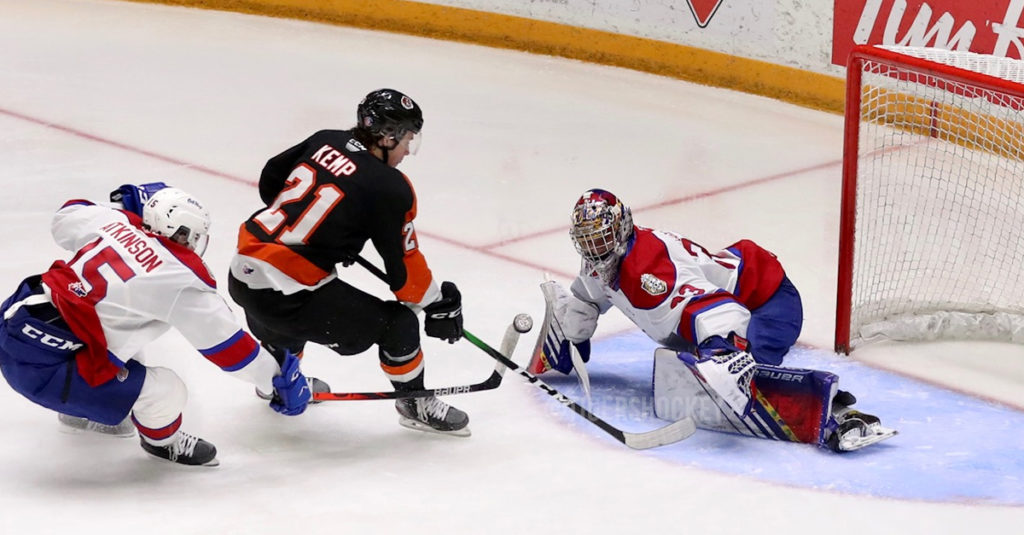 Medicine Hat, AB — This will be the last official game of a very challenging season for everyone in the Central Division.  The Tigers will play with all the heart and soul they can muster to garner a win.  Starting goaltenders will be Garin Bjorklund for Medicine Hat and Sebastian Cossa for Edmonton.  Shane Smith will make his debut with the Bengals in tonight’s game.

The Tigers had a fair number of chances with quality shots on Cossa, but were not able to put the puck passed him.  Scott Atkinson opened up the scoring for Edmonton, with a great shot to the upper right hand corner to beat Bjorklund.  Medicine Hat got a chance to even the score when the Oil King’s Atkinson took a roughing penalty.  With a 39% success rate on the power play, the Tigers gave it their all but couldn’t score.  There were some great end to end rushes by both teams.  The end of the period had Edmonton celebrating when they thought they had another goal, but after a review by the officials, it was deemed no goal.  The whistle had gone before the puck crossed the goal line.

Medicine Hat hit the ice with renewed purpose in the 2nd period and were able to put pressure on the Oil Kings.  They definitely needed to find a way to beat the 6’6″ Cossa.  A cross checking penalty to Edmonton’s Kaid Oliver gave the Tigers a chance to even the score but Cossa again came up big.  Tempers got a little hot and Carlin Dezainde and Jalen Luypen dropped the gloves.  Back to back penalties to the Tigers would provide the Oil Kings with more opportunity to widen the gap, and they did just that.  Logan Dowhaniuk picked the corner on a beautiful shot to make it a 2 – 0 game.  Medicine Hat threw everything they had at Edmonton and hopefully that momentum would carry into the 3rd period.

There was a flurry of shots on Cossa to start the 3rd, but the Oil Kings netminder did not let anything get passed him.  The Tigers offense was working hard to find a way to connect, but the Oil Kings were very strong on the puck.  When Edmonton’s Caleb Reimer took a penalty for high sticking, the Tigers gave it their all, but the Oil Kings had an excellent penalty kill.  Daniel Baker was given 2 min for high sticking, but the Tigers also had a great penalty kill.  During the last few minutes of the game, Bjorklund left the net for the extra attacker, and Edmonton’s Kaid Oliver made it 3-0 and that’s how the game would end.  Undoubtedly, the Tigers and Oil Kings rivalry will continue for some time to come.

Ryan Chyzowski, Cole Clayton and Brett Kemp were the 3 stars of the game.  All 3 over agers had an exceptional season.