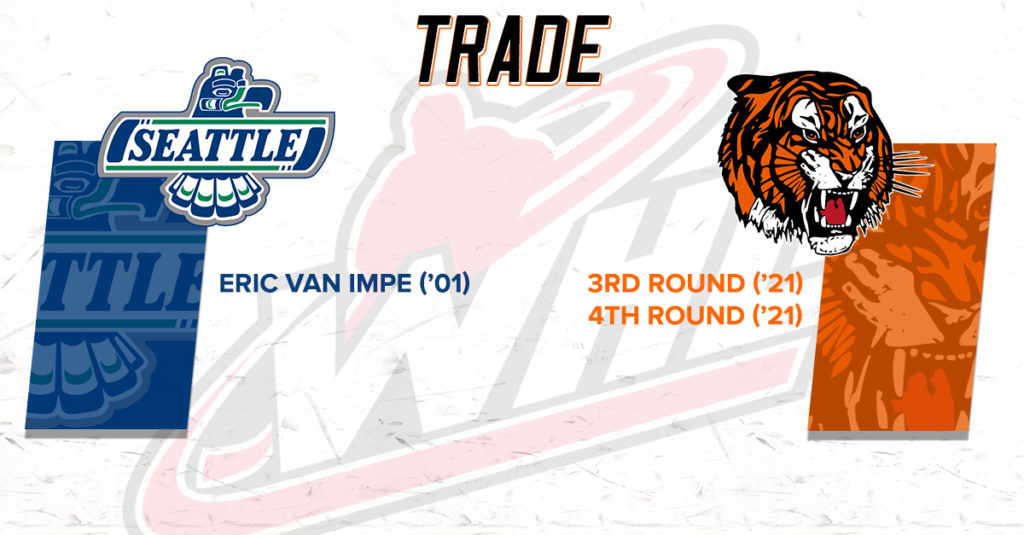 Medicine Hat, AB – The Medicine Hat Tigers have announced today that they have traded over age forward Eric Van Impe (’01) to the Seattle Thunderbirds in exchange for a 3rd round and 4th round draft picks in the 2021 WHL Draft which will take place this December.

Eric Van Impe was originally drafted in the 2nd round, 30th overall by the Spokane Chiefs in the 2016 WHL Draft and was acquired by the Tigers at the beginning of the 2017-18 season. Since being acquired by the Tigers the steady blue liner has appeared in 151 games for the Orange and Black, scoring 10 goals and adding in 26 assists, to go along with 83 penalty minutes.

“It’s the worst part of the job when you have to part ways with good people” says Tigers General Manager and Head Coach Willie Desjardins. “Eric has been a big part of our team on and off the ice and definitely would not have been moved without the 20-year-old rule, we wish him all the best in Seattle.”

The Tigers are back in action tomorrow night when they head to Red Deer to take on the Rebels, before returning home Saturday to take on the Edmonton Oil Kings. Tickets for that game are available at Tixx.ca or at the Co-op Place box office.