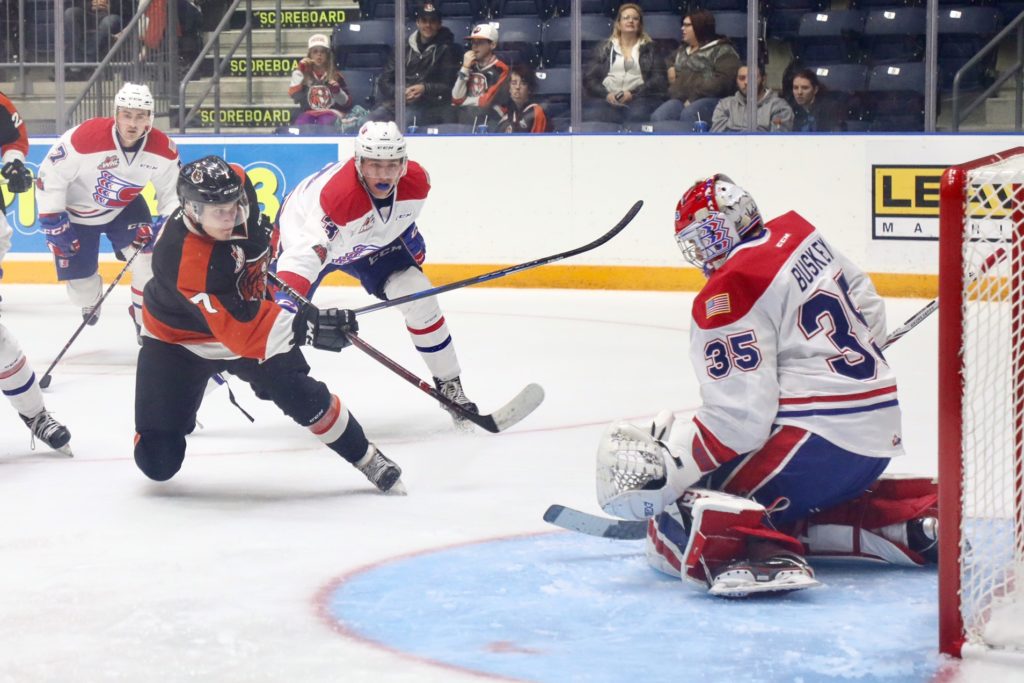 The 18-year-old forward acquired in last week’s trade with the Spokane Chiefs turned the tides in Wednesday’s 7-4 win over his former franchise — immediately answering a tying-goal from former Tiger Zach Fischer to shift the momentum back in Medicine Hat’s favour at a critical point in the game.

Ostir’s second-period marker helped push Fischer’s Chiefs onto their heels while opening the floodgates for four more goals to come from his teammates.

Fischer violated his contract with the Tigers earlier this month by opting to part ways with the team, but quickly found a new home in a trade with Spokane. The resulting transaction brought Ostir to the Gas City along with defensive prospect Eric Van Impe and a second round bantam pick in 2019.

Fischer has had a strong start with the Chiefs with four points in his first four games, though he remained tight-lipped regarding his decision to leave Medicine Hat, or why Spokane is the right fit.

“At this time I think it’s hard to answer that,” Fischer said prior to the game. “It’s been good so far. It’s only been about five days now but it’s been good.”

While Chiefs goaltender Dawson Weatherill stymied a handful of early chances to keep his team in a scoreless game— including a four-minute man advantage with Taylor Ross in the box for high sticking —Tigers rookie Josh Williams managed to break through late in the first.

The 16-year-old winger cut in and finished off a cross-ice pass from Gary Haden to light the lamp and send the Tigers into the break with a narrow lead, but it wouldn’t last long.

Spokane’s Riley Woods put his team on the board less than four minutes into the second. The marker pushed Medicine Hat onto their heels, but after killing off a slashing minor to Ryan Jevne, Tigers blueliner David Quenneville put his team back out in front.

The 19-year-old Edmonton product ripped a slap shot from the point past Weatherill to bring the majority of the 3,106 fans at the Canalta Centre to their feet. Quenneville had an 11-game point streak dating back to last season snapped in Sunday’s 7-2 loss to the Lethbridge Hurricanes, but started it back up again with a goal in Tuesday’s 5-2 win over the Red Deer Rebels and another Wednesday.

While Fischer stepped up with his lone goal of the night three minutes later to draw even — earning an ovation from the crowd in his return to the Gas City — Ostir immediately responded in kind then Tyler Preziuso tacked on to chase Weatherill from the crease.

Spokane’s Nolan Reid cut back into the lead in the dying minutes of the second — beating Tigers goaltender Jordan Hollett after stepping into a deflected pass at the low circle — but the Tabbies picked up their pace in the third.

Williams tacked on for his second of the night and fourth of the season, then Ryan Chyzowski and James Hamblin struck in succession to leave the Chiefs reeling.

Hudson Elynuik added a late goal for Spokane on a breakaway.

Hollett collected his fourth win of the year with a 34-save performance, pushing the Tigers to 8-4-0-0. Chiefs backup Donovan Buskey settled for the loss after stopping 14 pucks in relief of Weatherill — who was repleaced after allowing four goals on 17 shots. The Chiefs slipped to 8-6-0-1 with the loss.

The Tigers return to the Canalta Centre Friday to host the Moose Jaw Warriors at 7:30 p.m.