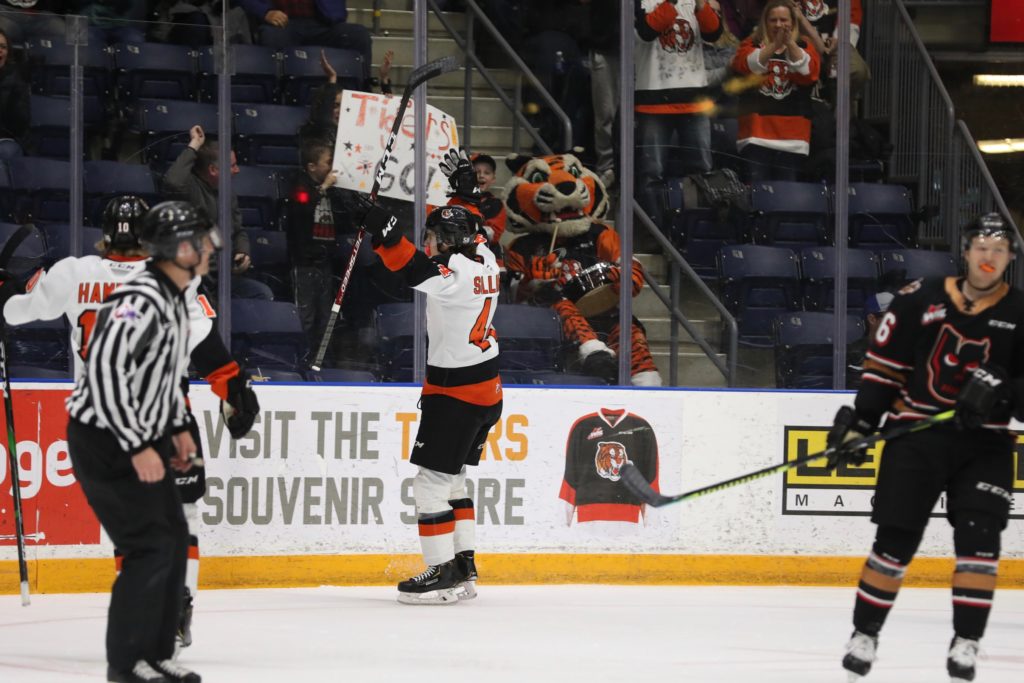 Medicine Hat, AB — The Medicine Hat Tigers defeated the Calgary Hitmen 6-1 and they are now tied in second place in the Central Division with the Lethbridge Hurricanes.

Rookie forward Cole Sillinger scored two goals in the game earning first star of the night. Brett Kemp had a three assist night while Ryan Chyzowski scored a goal and collected his 100th career WHL assist in the contest.

Four minutes into the game while the Tigers were on their first power play of the night, Elijah Brown combined with Kemp to set up Sillinger to score his first of the night.

Midway through the period, Chyzowski’s fired the puck on net and Baxter Anderson was there to poke it in to give the Tabbies at 2-0 lead. Kemp also collected an assist on Anderson’s seventh goal of the season.

Sillinger scored his second of the night just over four minutes into the second stanza. His 21st goal of the season was assisted by Cole Clayton and Dylan Plouffe.

Veteran forward Kyle Olson responded for the Hitmen by scoring on their first power play opportunity of the night just over six minutes into the period. Late in the stanza on a play from Bryan Lockner and Plouffe, Cyle McNabb scored his seventh goal of the season regaining the Tigers’ three goal lead.

In the final frame, the Tigers scored twice to ensure their victory. Chyzowski scored his 31st goal of the season on the power play midway through the period. Kemp and James Hamblin assisted on the play.

Late in the game, Jonathan Brinkman scored his 13th goal of the season to make it 6-1. Lockner and Damon Agyeman collected the assists.

Goaltender Mads Søgaard stopped 28 of 29 shots to earn the win. McNaughton turned aside seven of the eight shots faced in his relief of Peters.

The Orange and Black are now 39-19-2-1 and they will suit up tomorrow against the Edmonton Oil Kings. Saturday’s game is their WHL Suits Up to Promote Organ Donation Presented by RE/MAX game. The special themed jerseys the players will be wearing will be auctioned off online starting at 7:30 PM Saturday and closing at 7:30 PM March 11th. Tickets for Saturday’s game can be purchased at the Canalta Centre Box Office or online.