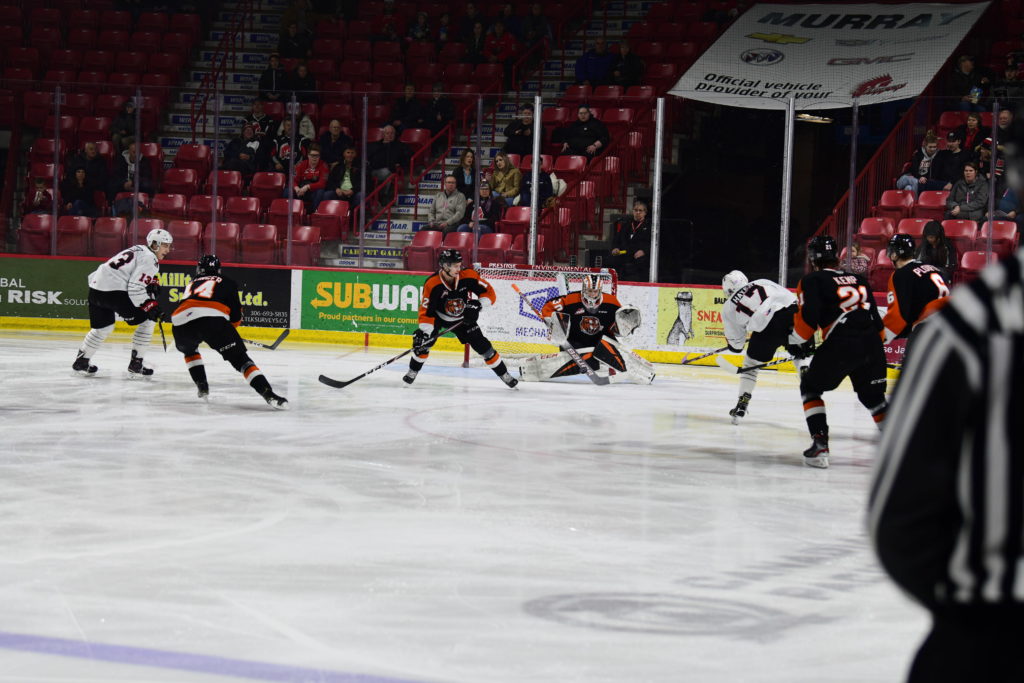 Despite the Warriors opening the scoring, the Tigers scored four goals in the first frame to lead 4-1 after 20 minutes of play. Dylan Plouffe collected his 100th career WHL assist in the contest while Damon Agyeman scored his first career WHL goal.

Fifty-six seconds into the game, rookie Cade Hayes opened the scoring to give the Warriors an early 1-0 lead.

Just over four minutes later the Tigers were able to draw even. After James Hamblin won an offensive faceoff, Plouffe collected the puck and found Lukas Svejkovsky on the backdoor who did not hesitate to score his 12th goal of the season. Plouffe’s assist on Svejkovsky’s goal was his 100th career assist.

With less than six minutes remaining in the opening period, Cyle McNabb was behind the net and passed the puck out front to Baxter Anderson whose effort was denied. Agyeman collected Anderson’s rebound and backhanded the puck past Warriors goaltender Brock Gould to score his first career WHL goal.

Two minutes and forty-four seconds later while the Tabbies were on their second power play of the night, Hamblin had possession of the puck in the left circle and drew a couple of Warriors towards him. He then found Ryan Chyzowski who one timed the puck into the back of the night to score his 20th goal of the season. Plouffe assisted on the play.

In the last two minutes of the period, while the Tigers were on their third power play of the night, Brett Kemp played the puck to Chyzowski who found Cole Sillinger all alone and Sillinger was able to score his first of the night. The Orange and Black headed to the dressing room leading 4-1.

Just over four minutes into the second stanza, Hayes deflected the puck past Tigers goaltender Mads Søgaard to get his second of the night and cut the Tigers’ lead to two.

In the last seven minutes of the middle period, Chyzowski forced a turnover in the neutral zone while the Warriors were on the power play. He quickly fed the puck to Kemp who tore away on a breakaway and beat Gould top corner glove side to score shorthanded.

Ryder Korczak quickly responded for the Warriors before their power play expired to keep Moose Jaw within two.

With five seconds left in the period, Kemp scored his second of the night to send the Tigers to the dressing room leading 6-3 after 40 minutes of play. Chyzowski and Plouffe collected assists on Kemp’s 22nd goal of the season.

In the final frame, Sillinger carried the puck up the ice through the neutral zone with a burst of speed before snapping it over the shoulder of Gould to score his second of the night and make it 7-3 for the Tabbies. Sillinger’s second goal of the night was his 18th goal of the season.

The Warriors scored a pair of goals in the third period but the Tigers held on to win 7-5. Logan Doust scored midway through the stanza on the power play and Garrett Wright added one off a turnover with just under five minutes to play.

Søgaard turned aside 25 of the Warriors’ 30 shots while Bilous stopped all 10 shots in his relief of Gould.