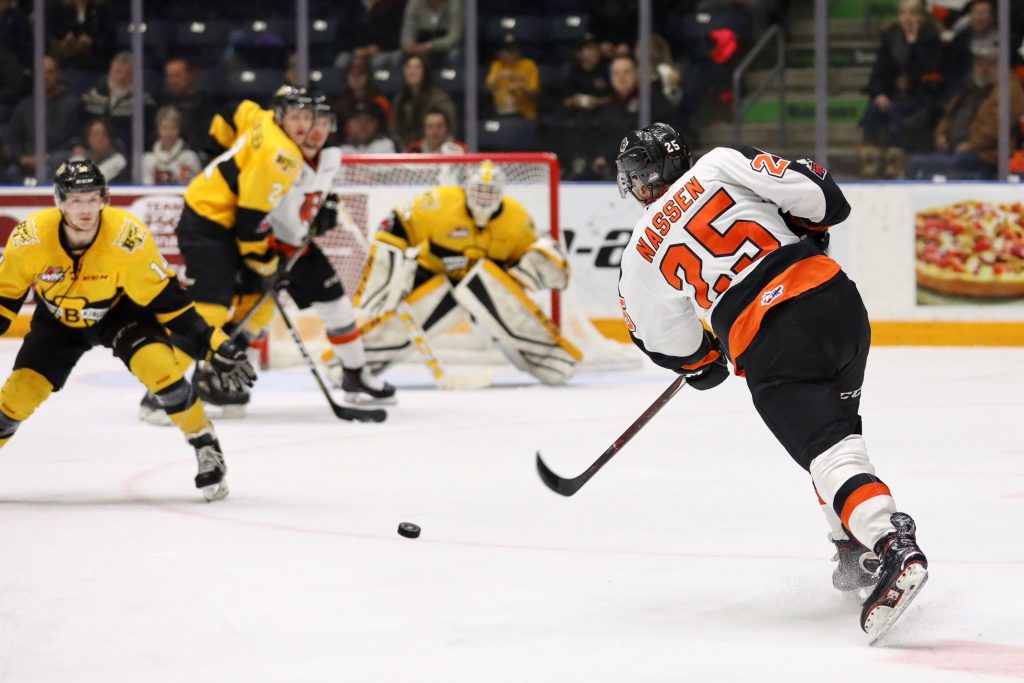 The Medicine Hat Tigers were derailed 5-2 by the Brandon Wheat Kings in game 5 of the Eastern Conference Quarter Final.

Ryan Chyzowski scored both of the Tabbies’ goals while netminder Jordan Hollett stopped 26 of the 30 shots he faced.

Midway through the first period, Chyzowski beat Wheat Kings goaltender Dylan Myskiw glove side by firing the puck off the top corner and in. David Quenneville and Tyler Preziuso assisted on Chyzowski’s 1st goal of the night.

Early into the second frame, Preziuso carried the puck down the ice, passed to Ryan Jevne who fed the puck to Chyzowski to score his second of the night and fourth of the playoff series.

The Wheat Kings responded with a couple goals of their own in that period to bring the game to a 2-2 draw and send both teams to the dressing tied after 40 minutes of play. Ty Lewis scored on the power play before Luka Burzan redirected a shot into the net.

Brandon extended their lead to 4-2 early in the final stanza with a couple goals from Connor Gutenberg and Linden McCorrister. Gutenberg scored 19 seconds into the period and McCorrister’s goal was on the power play.

Hollett left the Tigers’ net with less than two minutes remaining in the game to give the Tabbies an extra attacker. The Wheat Kings forced a turn over and carried the puck down to the Tigers’ end before Stelio Mattheos pounced on a loose puck and buried it into the empty net to secure the Wheat Kings a 5-2 victory.

Myskiw turned aside 24 of the Orange and Black’s 26 shots.

The Wheat Kings lead the series 3-2 and both teams will travel to Dauphin, MB, for game 6 Sunday night. The puck drops at 6:00 PM.