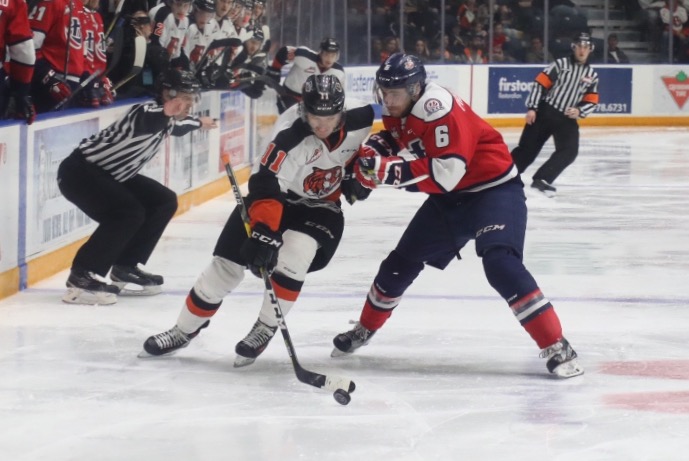 Medicine Hat, AB — With a 9 game absence from the ice the Medicine Hat Tigers were looking to begin Round 2 the same way they ended Round 1, their opponent the Lethbridge Hurricanes. The Canes were coming off a greuling seven game set with the Red Deer Rebels. The series just concluded on Tuesday, not giving Lethbridge much time for rest heading into Friday night. A rambuncous Canalta Centre crowd fed the Tigers energy on their way to a dominating performance.

Michael Bullion got the call in goal for the Tigers, looking to extend his career best streak in net. Medicine Hat did not change their lineup heading into Game 1, they went with the same 20 players as they did throughout the final 3 games of the Brandon series. For Lethbridge the Hurricanes were without young defenseman Calen Addison and overage forward Matt Alfaro. As the puck was dropped the Tigers dominated from the outset. The Tigers speed was unable to be matched by Lethbridge. John Dahlstrom would get the scoring started in Round 2 with his 4th of the season. A shot from the high slot ricocheted off a leg in front of the net and right onto the tape of the big Swede for a later 1-0 lead heading to the intermission.

The second period had the same flare to it as the opening 20 minutes. Medicine Hat played physical and fast while Lethbridge had moments like they were just trying to hang on as much as possible. Chad Butcher buried his 2nd of the post season on a beautiful passing play with linemates Zach Fischer and Steven Owre. Medicine Hat’s top line was dominate all night, creating chances almost every shift they were on the ice. Not to be out done was Medicine Hat’s 4th line. Consisting of rookie Ryan Chyzowski and veterans Ryan Jevne and Tyler Preziuso, the trio were also dominate on the night, buzzing in the offensive zone and creating turnovers.

Before the second frame would end, Owre picked off a clearing attempt by the Canes and roofed a puck past Stuart Skinner which extended the lead to 3-0 heading into the intermission.

The third period was the period Medicine Hat put the dagger in the coffin. Holding Lethbridge to only 11 shots after 2 periods, Medicine Hat’s defense bent but didn’t break. Michael Bullion stopped the shots he needed to and the defense, with great back checks, got the best of Lethbridge. Medicine Hat got 2 power plays in the frame but couldn’t capitalize on the man advantage. For the first time in a while the Tabbies did not visit the sin bin on the night, holding the Canes power play on the bench. The final nail came courtesy of the Fischer. He would score his 4th of the season to close out a dominating game for the Tigers and a convincing 4-0 victory.

Game 2 of this best of seven series goes Saturday night at the Canalta Centre.