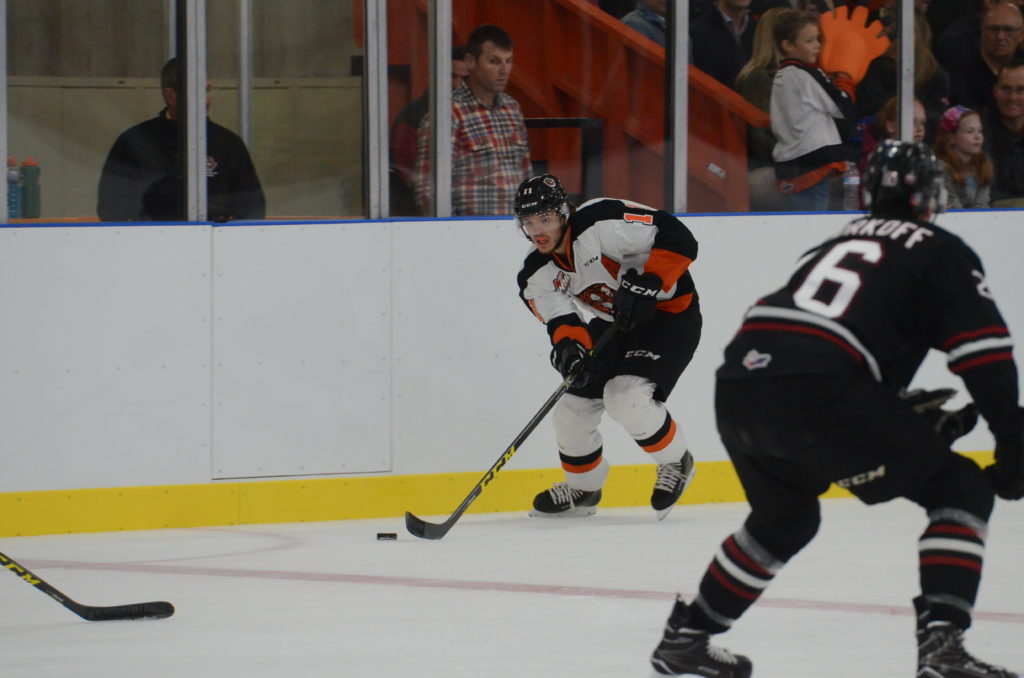 Ralston, AB — The Medicine Hat Tigers once again had a different looking roster as the Tabbies were without 6 of their top players including Chad Butcher and Nick Schneider. They faced off in Ralston against the visiting Red Deer Rebels. Red Deer, who is a very different team than last season, sported many rookies competing for spots on this year’s squad. Despite the different look the chemistry was there for the Tabbies.

Steven Owre opened the scoring in the first period with a shorthanded marker. Owre stole the puck from a Rebels forward and sent it cross ice to Mason Shaw who returned the pass immediately sending Owre in on a partial break. Owre, with a goal in sight sniped the bottom corner as the 300 Ralston residents went crazy for the opening goal. For some residents it was their first ever hockey game as they have recently come over from the United Kingdom for military service. Medicine Hat had a stingy attack while killing off multiple penalties in the period to hold a 1-0 lead.

Owre would once again dazzle the crowd as he was recipient of yet another Shaw pass and undressed the Rebels netminder on his way to his 2nd of the night. Zach Fischer also got an assist on the play. Red Deer couldn’t muster anything against the Tigers pressure defence. Medicine Hat activated their defense core and were pinching when needed and making the right plays, hardly turning the puck over. Just before the period would end Tyler Preziuso showed why he is ranked in the NHL’s futures list as a nice toe drag around a Rebels rookie was followed by a snipe top corner to extend the Tigers lead to 3-0 after 40 minutes.

In the final frame tensions grew as an already feisty game finally lead to the gloves being dropped. Fischer was the first to go after giving a hard check along the wall to fellow veteran Reese Johnson, the two decided to tussle with Fischer getting the better of his foe. Later, Connor Clouston who is know stranger to the fisticuffs, showed down with D-Jay Jerome a Rebels rookie. Clouston would land 2 heavy left hands before dropping Jerome to the ice, give the rowdy army base crowd a little bit more to cheer about. On the offense, just the lone goal by Owre to complete the hat trick as he batted home a bouncing puck to cap the game 4-0.

In the victory 16 year old goaltender Duncan McGovern earned his first preseason shutout in the WHL as he was only tested 14 times over 60 minutes.

The Tigers are back in action Saturday night in Red Deer to face the same Rebels for a 7:00pm puck drop.