TIGERS DOUBLE UP ON PATS 4-2 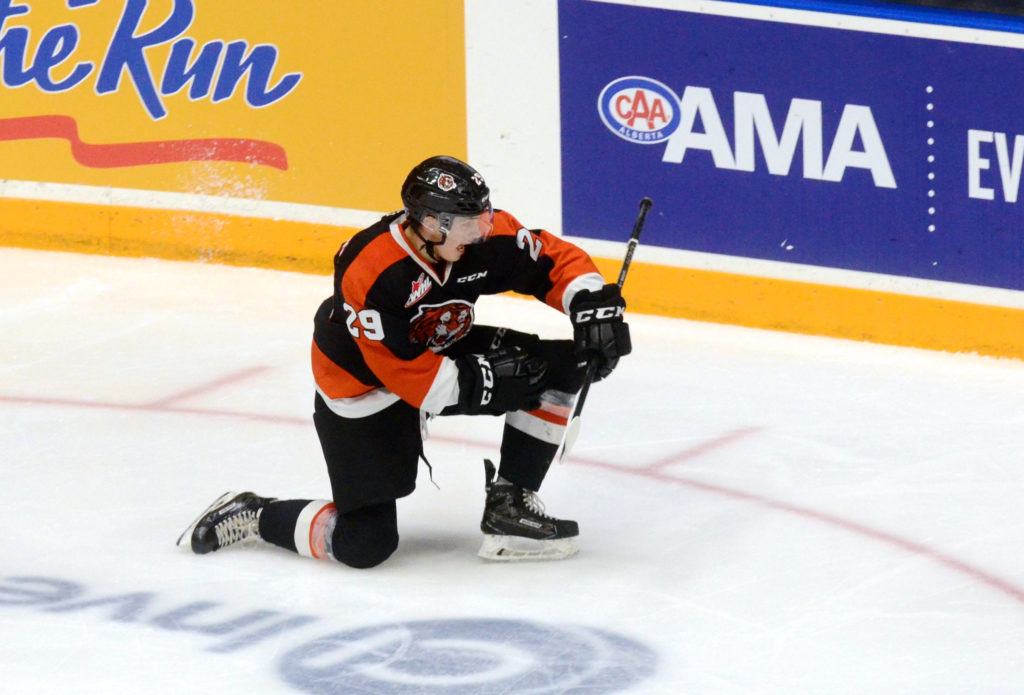 Medicine Hat, AB — The Medicine Hat Tigers were back home after splitting their 2 game Eastern Conference road trip. Tonight they would welcome the Regina Pats. Matt Bradley (Regina Pats), Jordan Hollett (Medicine Hat Tigers) were playing against their former team for the first time since being traded during the offseason. Jordan Hollett would make his Tigers debut tonight in front of 3524 fans, at the other end Tyler Brown would get the call for the Pats.

Wyatt Sloboshan would test his former teammate Jordan Hollett early, as he would come down the wing with the shot on goal. Hollet would turn that one aside. Max Gerlach fires a bullet that would catch Tyler Brown right in the shoulder. Tyler Preziuso started the scoring for a Tigers as he directs in David Quenneville’s point shot. The Pats would answer back as Oksanen first shot would be kicked out by Hollett, but Sloboshan would be there to clean up the rebound knotting the game up at one. David Quenneville would chip the puck over three Pats defenders, as Mark Rassell slides the puck five-hole on Brown to take a 2-1 lead after one.

Early in the 2nd period, George King would deflect Macro Creta’s point shot past Hollett tieing the game. The game would open up as the back and forth action continued. Both goaltenders would keep the game tied 2-2 game after 40 minutes of play. Jordan Hollett making 6 saves in the frame, as Tyler Brown made 11. Setting up a tense final frame.

Kristians Rubins would fly into the Pats zone 1 on 3, do a little spin-o-rama putting the puck just wide of the net. Ryan Chyzowski would give the Tigers the lead in the third period, as his shot from below the goal line would find it’s way behind Brown. David Quenneville would add his 3rd assist of the night on Chyzowski’s tally. The Orange and Black would double up on the Pats. Zach Fischer’s original shot would be saved by Brown, Fischer muscles his way through to the front of the net as he buries his own rebound. Jordan Hollett would shut the door the rest of the way finishing the game with 19 saves, defeating his former team 4-2 earning his first victory as a Tiger.

The Tigers will do it all over again tomorrow starting at 7:30pm, as they will look for some revenge after losing to Prince Albert last weekend 4-2.