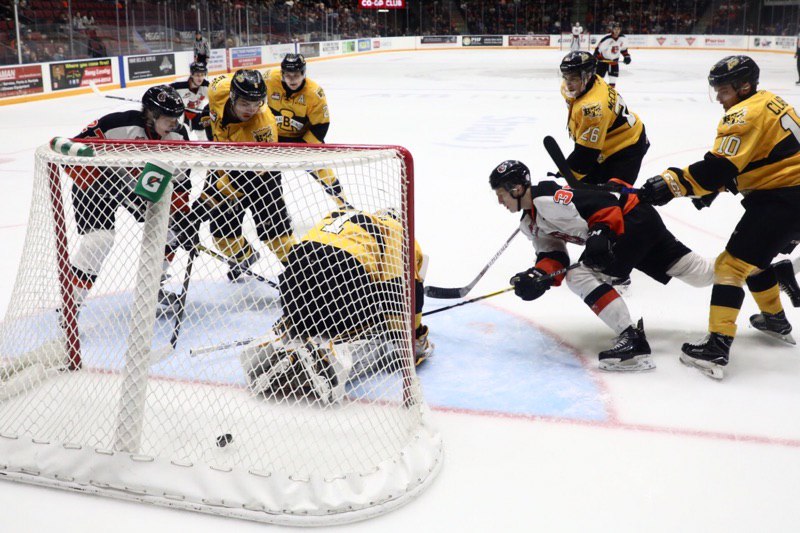 Medicine Hat, AB — After 72 games the Medicine Hat Tigers were ready for the 2017 WHL Playoffs as they took on the Brandon Wheat Kings in the first playoff series ever at the Canalta Centre. 15 players on the Tigers roster were also playing in their first post season game, including Captain Clayton Kirichenko, who after 239 games, played in his first game and made a big first impression.

It was a typical playoff atmosphere at the Canalta Friday night. Tiger fans were in a frenzy as playoff hockey returned to the Gas City after taking a one year hiatus. Kirichenko started his boys with his first career playoff goal 7 minutes into the game. Kirichenko and his linemates were playing 4 on 4 when Kristians Rubins found the streaking Clay driving the net and an early 1-0 lead. Before the period ended Matt Bradley buried his first of the post season with under 2 minutes remaining on the power play and the Tigers took a 2-0 lead heading into the break.

The Tigers dominating power play would take over the game in the second period with Mark Rassell’s first of the post season. Rassell banged home a rebound in front of the net, which kickstarted an epic night for the Calgary born Tiger. The Wheat Kings would get on the board moments later with Stelio Mattheos streaking down the win and rifling a shot top shelf on Tiger goalie Michael Bullion. Bullion played the pass across the net and was caught off guard on the Mattheos shot. The goal cut into the Tigers lead with the score standing at 3-1. Brandon was a physical team as it looked like their game plan was to hit the smaller Tigers every chance they could get. Their physically play did lead to penalties and once again the Tigers took advantage. Zach Fischer buried one on the man advantage, giving the assists to David Quenneville and Chad Butcher. The back and forth period continued with Tyler Coulter notching his 1st of the post season on a Wheat Kings 4 on 3 power play. Before the period ended Kirichenko floated a wrist shot on goal. The shot found its way onto the net and under the bar sending the Tiger into the break up 5-2.

In the third, it was the Mark Rassell show. Rassell scored twice in the frame to notch his first ever playoff hat trick. His first goal came on a power play when a Quenneville blast was blocked but the puck came right to Rassell’s tape and into the back of the net for a 6-2 score. Rassell completed the hat trick before the final buzzer would sound taking a pass from Max Gerlach, a toe drag, before potting the puck past a screened Logan Thompson.

Rassell, combined with a great performance from Kirichenko help lead the Tigers to victory Friday night, 7-2 to take Game 1 of their #WHLPlayoff series.

Medicine Hat is back in action Saturday night in Game 2 action at the Canalta Centre.