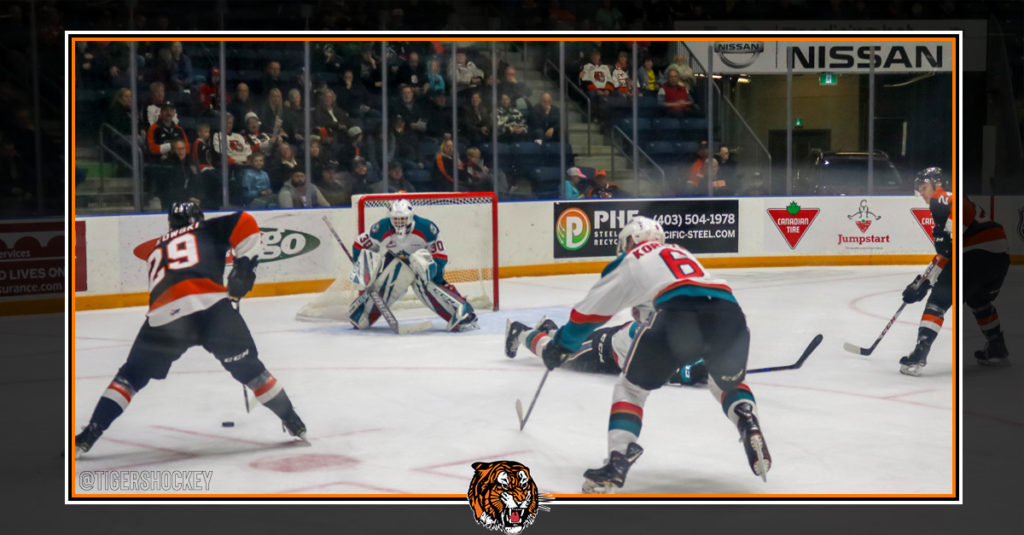 Medicine Hat, AB — The Medicine Hat Tigers drop a 2-1 decision to the Kelowna Rockets in their last game before the holiday break.

The Rockets were able to get the early lead and despite outshooting them 32 to 20, the Tigers were not able to complete the comeback.

Midway through the first period on a delayed penalty call, Tigers goaltender Jordan Hollett left his net to give the home team the man advantage. Unfortunately, a missed pass in the neutral zone found it’s way into the empty net to give the Rockets the 1-0 lead. Leif Mattson was credited with the goal.

In the second stanza, Mattson scored on the power play to make it a 2-0 hockey game.

Late in regulation, Ryan Chyzowski set up Captain James Hamblin to score a beautiful goal from the slot. Hamblin’s 17th goal of the season was the Tigers’ only goal in the contest.

The Orange and Black are now 17-15-1-2 and will host the Kootenay ICE December 28th, 2018, at the Canalta Centre. The game starts at 7:30 PM and the Redcliff Youth Centre will be in the Hut 8 Mining Community Corner.