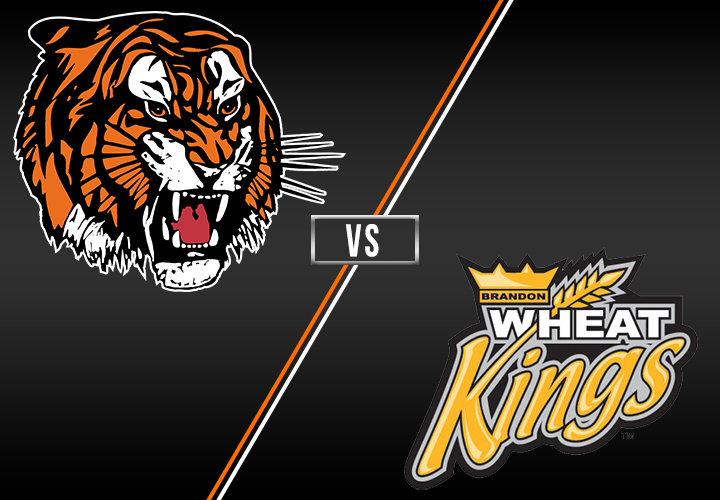 Medicine Hat, AB — After winning the first game of their road trip, the Medicine Hat Tigers drop the second game 4-1 to the Brandon Wheat Kings.

Rookie goaltender Mads Søgaard turned aside 42 of 43 shots faced while alternate captain Ryan Chyzowski was the lone goal scorer for the Tabbies.

With just over a minute left of the first period, Wheat Kings Luka Burzan opened the scoring to give the home team a 1-0 lead.

The play was fairly back and forth in the second stanza and late in that period, Trevor Longo fed Chyzowski the puck. Chyzowski powered through the Wheat Kings’ defencemen and fired the puck into the net to get the Tigers on the scoresheet. This was Chyzowski’s 11th goal of this season.

Shortly after Chyzowski’s goal, Stelio Mattheos regained the lead for the Wheat Kings to make it 2-1 at the end of the second period.

Early into the final frame Linden McCorrister was able to make it 3-1 for the Wheat Kings.

Søgaard left the net to with 1:40 left in regulation in hopes that with an extra attacker the Tigers could mount a comeback. Unfortunately, Ben McCartney won possession of the puck and iced it into the Tabbies’ empty net.

The Orange and Black are now 13-14-1-2 and will travel to Moose Jaw to play the Warriors Wednesday night. After Wednesday night’s contest, Medicine Hat will return home to host the Regina Pats on Saturday at the Canalta Centre. Home Depot is the game sponsor and the SPCA will be in the Hut 8 Mining Community Corner.