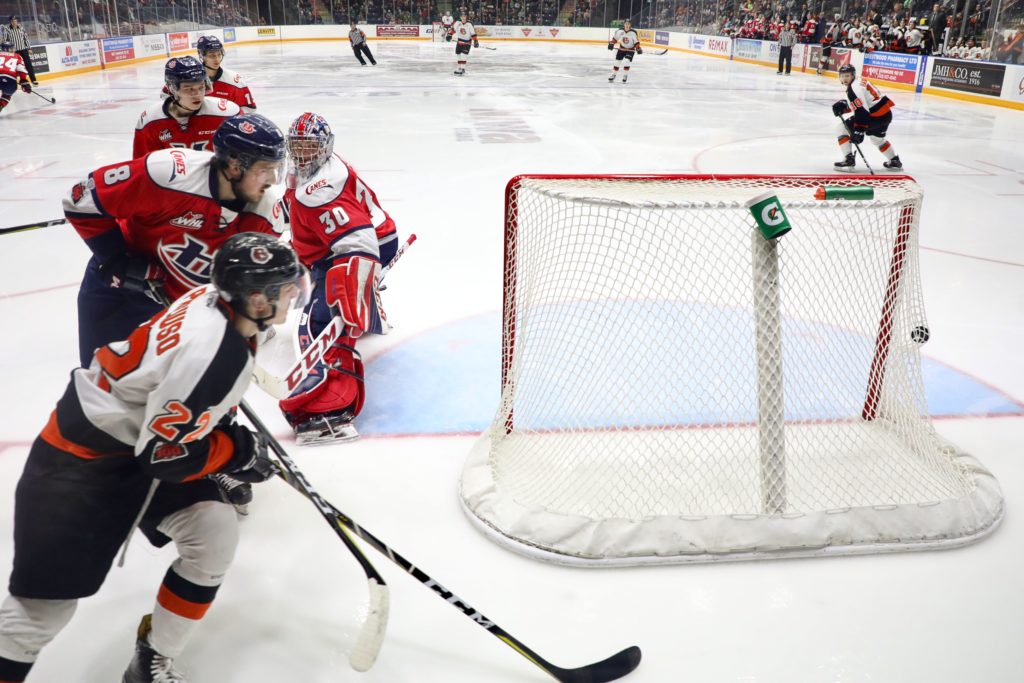 Tyler Preziuso scored both of the Medicine Hat Tigers’ goals as they fell 3-2 to the Lethbridge Hurricanes.

It was Preziuso’s 2nd two goal game this season and 2nd two point night a row.

Tigers goaltender Jordan Hollett returned to action after suffering a knee injury in early February and stopped 20 of the 23 shots he faced.

Ryan Jevne picked up Dalton Gally’s shot from the point and passed it back to Preziuso who didn’t hesitate to fire it into the net to give the Tigers a 1-0 lead.

The Orange and Black continued to pressure throughout the period and combined on several chances but were unable to get another one past Hurricanes netminder Logan Flodell before the end of the first period.

Preziuso raced down the ice on the penalty kill and picked up his own rebound just over a minute into the middle stanza to give the Tabbies a 2-0 lead and score his second of the night.

Hurricanes forward Zach Cox scored midway through the frame to get cut the home team’s lead to 1.

In the dying minutes of the period, Hurricanes Captain Jordy Bellerive buried a rebound to bring the game to a 2-2 stalemate.

Early in the final frame, Hurricanes forward Logan Barlage scored to give the visitor’s their first lead of the night.

Despite great puck movement and firing 15 shots on Flodell in the last period, the Tigers were unable to get another one past him and fell 3-2 to the Hurricanes.

Flodell turned aside a total of 33 Tigers’ shots to help the Hurricanes win the game.

The Orange and Black finish the regular season with a 36-28-8-0 record and will face the 40-27-3-2 Brandon Wheat Kings in the first round of playoffs.