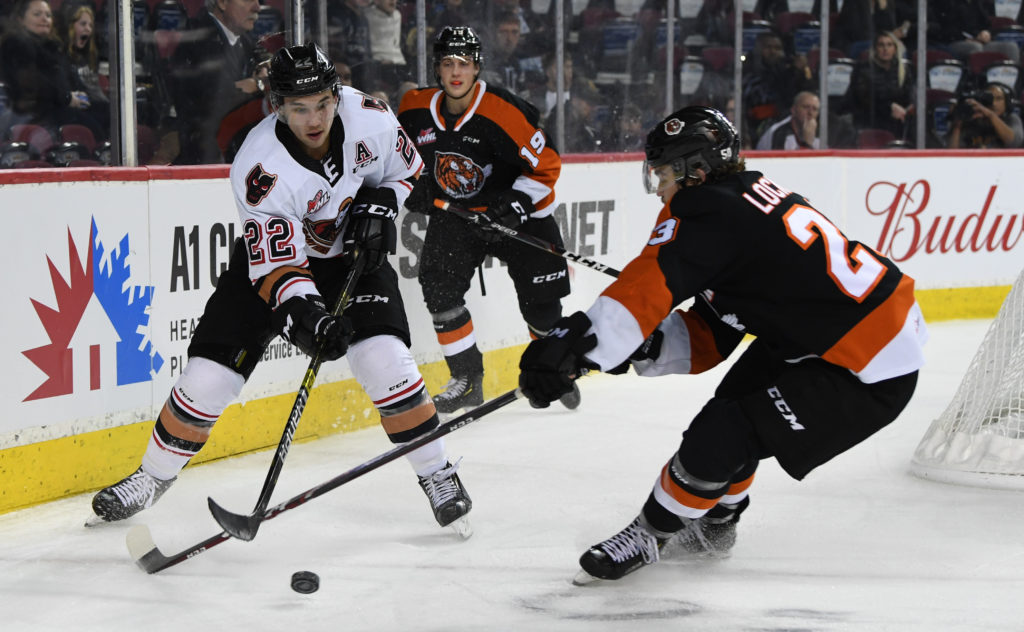 Medicine Hat, AB — The Medicine Hat Tigers rang in the new year by falling 4-2 to the Calgary Hitmen Wednesday afternoon at the Scotiabank Saddledome.

The two Central Division rivals were tied 1-1 heading into the final frame where the Hitmen were able to score three goals while the Tabbies only scored once. The Hitmen now lead the head to head series between these two hockey clubs 3-1-0-0.

Ten seconds into the game, the Tigers forced a turnover in the Hitmen’s end and Lukas Svejkovsky collected the puck before making a great move to beat goaltender Jack McNaughton and score his eight goal of the season. Svejkovsky’s goal is not only the Tigers’ first of the 2020 decade but also the WHL’s.

In the second stanza during a scramble in front of the Tabbies’ net, Jonas Peterek scored to bring the game to a 1-1 stalemate.

In the final frame, the Hitmen took the lead when the Tigers turned the puck over in their defensive zone and Hunter Campbell capitalized on it.

The Hitmen’s lead was short lived as less than two minutes later while the Tabbies were on the power play, James Hamblin and Brett Kemp combined to set up Ryan Chyzowski to score his 19th goal of the season. Chyzowski leads the league in power play goals with 11.

On a five on three power play for the Hitmen midway through the period, Mark Kastelic regained the lead for the home team making it 3-2 for the Hitmen.

Just under four minutes later, Sean Tschigerl tipped in a shot from the point to extend the Hitmen’s lead to 4-2.

The Tigers continued to pressure the Hitmen and pulled goaltender Mads Søgaard with over two and half minutes left to play while they maintained possession in Calgary’s end. Despite their best efforts, the Tabbies were unable to get another one past McNaughton.

Søgaard stopped 25 of 29 shots faced in the contest while McNaughton turned aside 32 of the Tabbies’ 34 shots.

Medicine Hat is now 23-11-1-1 and they will return home for a double header weekend at the Canalta Centre. Friday they will host the Hitmen for a rematch and it will be a NewRock Developments Chuck a Puck night. On Saturday, the Orange and Black will face the Seattle Thunderbirds for their only meeting of the season. Saturday’s game will be brought to you by 20/20 Vision Care. Tickets for the games can be purchased in person at the Canalta Centre Box Office or online.