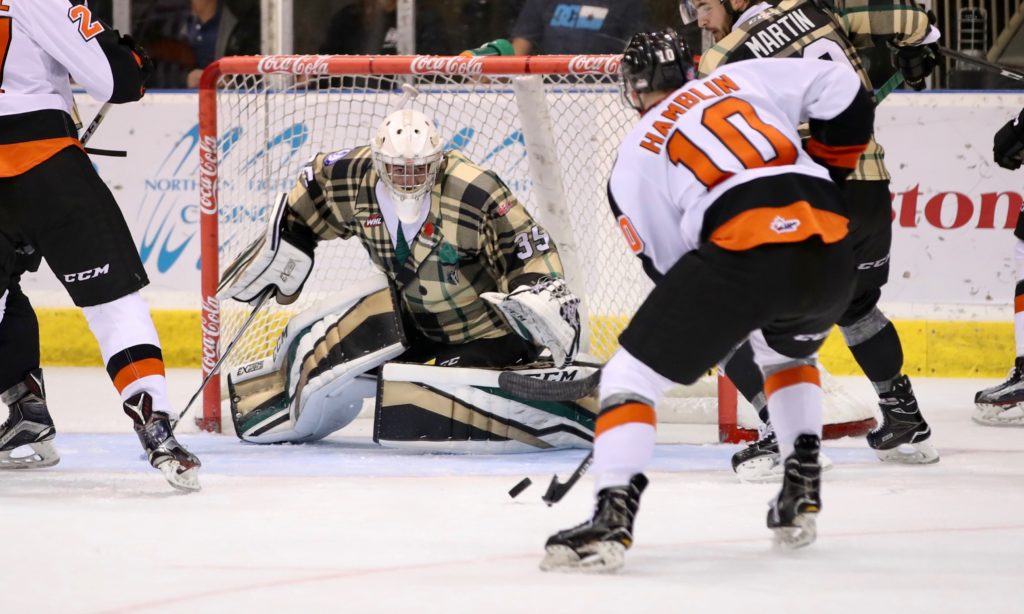 Medicine Hat, AB —Medicine Hat would travel to Prince Albert for their final game on this 2 game mini road trip. The Tigers came away with a 6-2 win in Saskatoon as they would look to go for two in a row tonight. The Raiders were also coming off a win in overtime versus the Calgary Hitmen. Prince Albert had a wonderful pregame ceremony, as they were sporting their green and black plaid jerseys for WHL Suits Up with Don Cherry to Promote Organ Donation Presented By RE/MAX. In goal for Medicine Hat it would be Michael Bullion making his 4th straight start. The rookie Curtis Meger would get the call for the Raiders.

Prince Albert would start the opening period with two scoring chances right off the hop, Bullion would be sharp and turn both chances away. D-Jay Jerome would get called for a double minor sending Medicine Hat to the power play. Meger would stand tall turning away a flurry of chance by the Tigers.  Mick Kohler would be pinned up against the boards, he would find Gary Haden who spins around the net, as he outwaits Meger and raises the puck to the top of the net to take a 1-0 lead. Cole Fonstad would tie the game up with a shot from the blue line which would find the back of the net. Medicine Hat would hold a slight shot lead 12-8 after one period.

The middle frame would see a defensive battle take place, as both sides would tighten up defensively.  Mark Rassell would break-in into the Raiders zone, Zack Hayes would tangle him up, getting called for interference sending the Tigers to the power play. Medicine Hat would take the lead on the power play. David Quenneville would find a red-hot Max Gerlach, with a nice cross-ice pass, as Gerlach would blast one past Meger for his 4th goal of the season to take a 2-1 lead. With time ticking down in the 2nd period the Raiders would find the back of the net. Devon Skoleski would dive out and backhand the puck past Bullion with 9.4 seconds left to play in the period tieing the game at 2. Bullion would make 9 saves during the period and Meger would make 7.

Prince Albert would take the lead 4 minutes into the 3rd. Defencemen Budik Vojtech would jump into the play, finding Parker Kelly in front tucking one past the Tigers netminder taking a 3-2 lead. The Tigers would get into some penalty trouble which would send the Raiders on a 5 on 3 power play. The Penalty Kill would come up huge and kill off both penalties keeping it a one-goal game. Medicine Hat would pull Michael Bullion with 1:45 left to play in the 3rd looking for the equalizer. Meger would hold off the Tabbies attack as Curtis Miske would seal the deal into the empty net. The Tigers fall 4-2 at the hands of the Prince Albert Raiders. Curtis Meger would finish the game stopping 30/32 and Michael Bullion would stop 32/35.

The Medicine Hat Tigers will now head home to begin a 5 game homestand, which will start on October 6th vs the reigning Eastern Conference Champions Regina Pats. 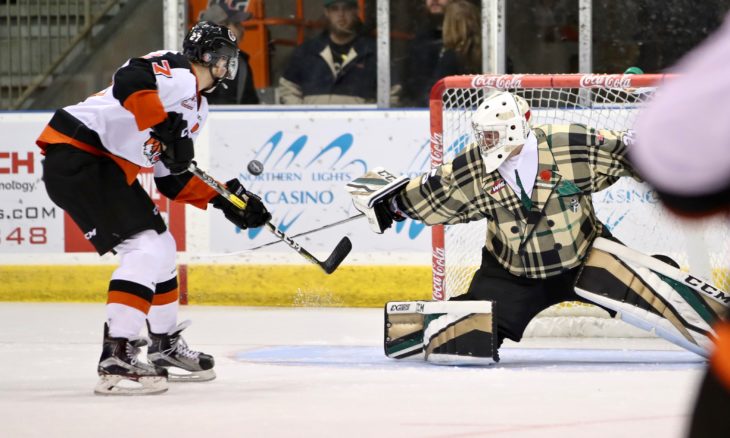