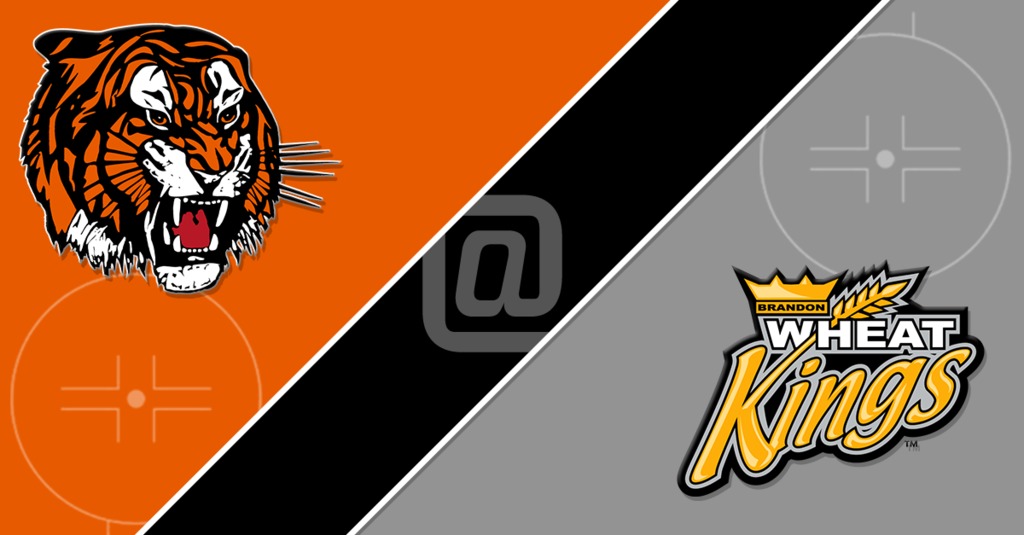 The Medicine Hat Tigers were forced to settle for a single point on Friday night at Westman Place.

The Wheat Kings earned an edge right off the hop when Linden McCorrister broke into the Tigers end, split the defence and beat Michael Bullion through the wickets.

Evan Weinger doubled up on the lead four minutes later after receiving a pass from Connor Gutenberg off the rush and beating Bullion through the five hole for a second time — sending the Hat netminder to the bench after allowing two goals on the first five shots.

While Jordan Hollett entered the Tiger crease fresh off a 49-save performance in Wednesday’s 5-4 shootout win over the Prince Albert Raiders, he was beaten on Brandon’s first chance thanks in part to a fortuitous bounce. Wheaties blue liner Kale Clague put the puck on goal and watched it bounce off Kaspick and into the slot, where Stelio Mattheos was waiting to beat Hollett with ease.

But the Tigers shook off the rough opening frame and clawed their way back into the contest with a dominant second period.

James Hamblin put the offence in gear five minutes in by banging a rebound past Brandon netminder Logan Thompson on the power play. Max Gerlach earned an assist on the goal, extending his point streak to six games with his eighth point in the span.

Tempers boiled over a few minutes later, prompting Tigers rookie Cole Clayton to drop the gloves with Wheaties blueliner Ty Ettinger. While Clayton was bloodied up in the bout, his teammates followed it up by cutting the deficit down to one.

Tyler Preziuso was credited with his ninth goal of the season after marching into the slot and backhanding a rolling puck past Thompson to silence the crowd of 3,885 and send the Tigers into the intermission with momentum on their side.

Medicine Hat looked to draw even when Henry Rybinski dangled past Ettinger and beat Thompson on a short break in the third, but the net was knocked off just before the puck crossed the line. While the decision drew ire of the Tigers bench — as the goal would have been the first of the rookie’s career — Rybinski drew a hook on the play and Hamblin made good on the ensuing man advantage to officially erase the early three-goal deficit.

But the Wheat Kings found their window back into the game when Ryan Chyzowski was booked for tripping halfway through the overtime period. Kaspick converted on the chance for Brandon’s seventh consecutive win.

Hollett was handed the loss despite making 36 saves in the contest, including seven while attempting to keep the Wheat Kings at bay in overtime.

The Tigers complete their four-game East Division road trip Saturday in Regina against the Pats (15-14-2-0). Puck drop is set for 6 p.m.