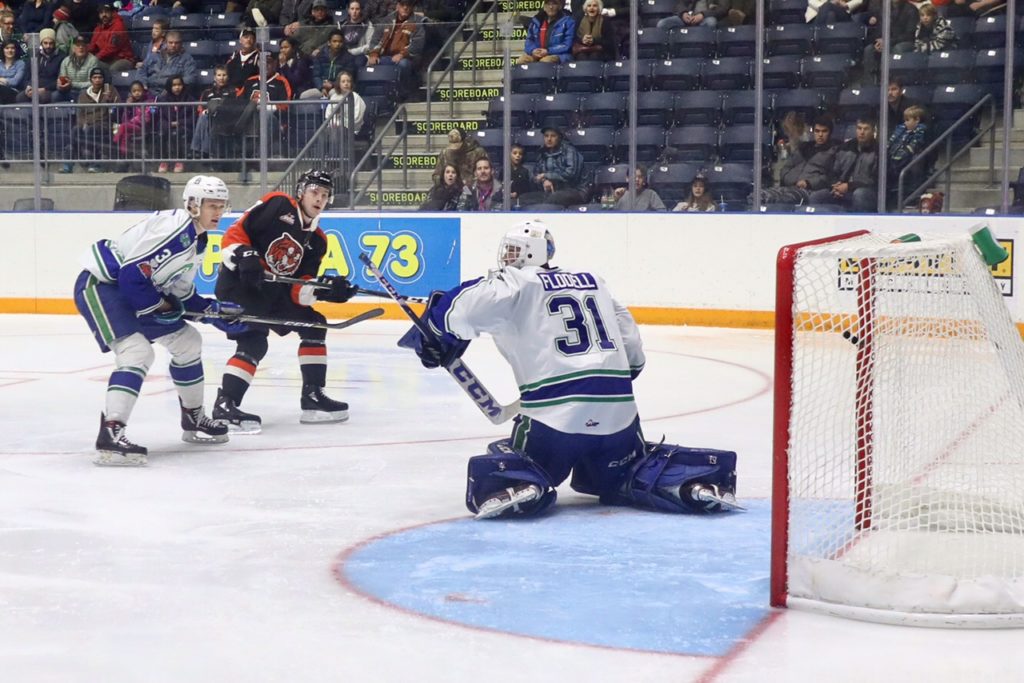 The Swift Current Broncos may have the Western Hockey League’s top three scorers, but it was Logan Flodell who stole the show on Friday night at the Canalta Centre.

The 20-year-old Broncos goaltender turned aside 39 chances to keep his team in front and secure a 4-3 victory over the Medicine Hat Tigers on a night in which goals came at a premium.

Tyler Steenbergen drew first blood just over 13 minutes into the opening frame. The WHL goal-scoring leader finished off a power play feed from Colby Sissons for his 29th of the year to open the scoring. Swift Current’s line of Steenbergen, Aleksi Heponiemi and Glenn Gawdin hold the top three spots in WHL scoring, respectively. They combined for seven points Friday, bringing the trio to 142 on the season.

Tigers winger Max Gerlach knotted the game back up on a wraparound chance two minutes later, but the Broncos tacked on in a hurry.

Steenbergen became the first WHL player to crack 30 goals this season four minutes after Gerlach’s equalizer — re-establishing a lead for Swift Current with 13 seconds left of the clock — then Connor Chaulk drove in another eight seconds later to leave the Tigers staring down a two-goal deficit despite outshooting the Broncos 15-7 through 20 minutes.

But Medicine Hat responded to the early pressure with a dominant second. The Tigers held the prolific Broncos out of the shot column for the first 13 minutes of the middle frame — when they were credited with the first of their four shots in the period on a long dump-in — while Mark Rassell converted for his 21st goal of the season to cut Swift Current’s lead back to one.

Bullion’s second save of the period featured the 20-year-old Alaskan reaching behind his back with the paddle and pull a puck off the line, while his third took away a Steenbergen 2-on-1 chance to preserve the one-goal deficit through 40 minutes.

The Broncos and Tigers traded markers in the early minutes of the third, with Heponiemi beating Bullion through the five-hole on a breakaway chance three minutes in, before Gary Haden cut the lead back to one with a shot over Flodell’s blocker.

While the Tigers kept the pressure on and pushed for a tying goal Flodell kept the door closed to push Swift Current to 14-4-1-0 on the year.

The Tigers hit the road for a four-game trip starting Tuesday in Prince George against the Cougars (7-9-2-2).