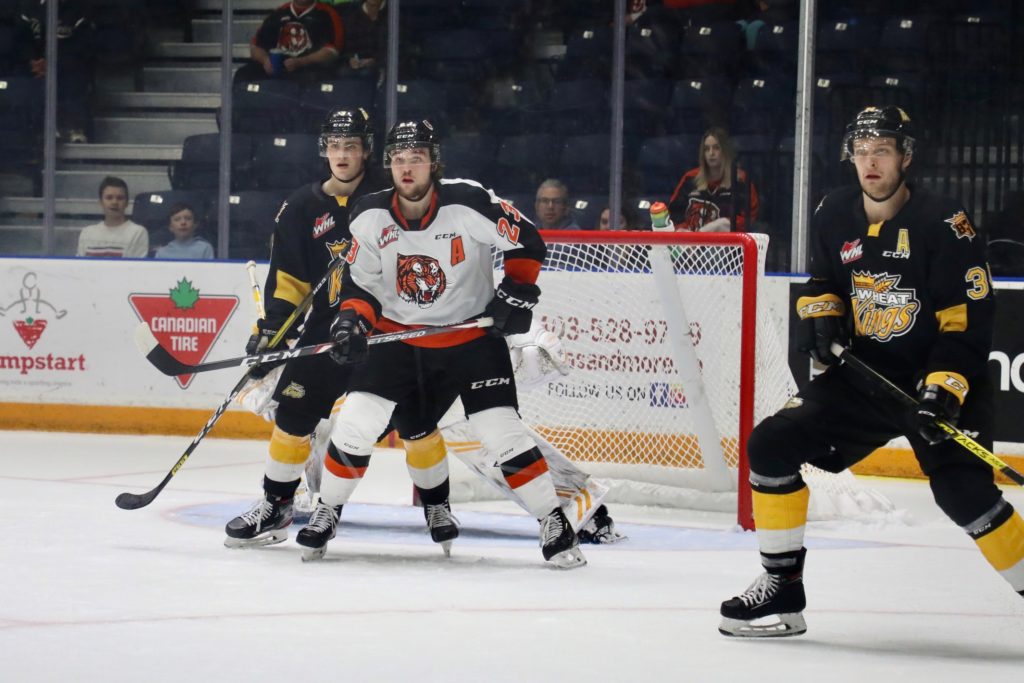 Medicine Hat, AB — The Medicine Hat Tigers made a late push but were unable to catch the Brandon Wheat Kings and fell 4-3 on Saturday night at the Canalta Centre.

Trailing 4-1 late in the game, the persistent Tigers continued to push and were able to score twice in the final few minutes to bring themselves within one but were unable to score a game tying goal.

On a rush up the ice in the first half of the opening period, Duncan Pierce scored for the Brandon Wheat Kings giving the visitors an early 1-0 lead.

In the dying seconds of the Tigers’ second power play of the night during the middle frame, Nick McCarry combined with Dylan Plouffe to set up Bryan Lockner to score his 10th goal of the season and bring the game back to a stalemate.

The Wheat Kings responded with two goals of their own in the second stanza. Midway through the period, Ben McCartney regained the lead for the visitors before Vincent Iorio scored on the Wheat Kings power play with less than a minute remaining in the frame. The Tigers headed to the dressing room trailing 3-1 after 40 minutes of play.

With just over three minutes left in the game, the Tigers pulled goaltender Mads Søgaard in hopes that having an extra attacker would help generate offense. The Wheat Kings won the puck and Luka Burzan scored on the empty net to make it 4-1 for the visitors.

Eight seconds after Burzan’s goal, Daniel Baker responded to bring the Tigers within two. Baker’s goal was his 13th of the season and it was assisted by Noah Danielson and Parker Gavlas.

With one minute and two seconds on the clock, Brett Kemp scored his 23 goal of the season to bring the Tigers within one. Corson Hopwo and Baker combined on the play.

The Tigers continued to be tenacious but were unable to get another one past Wheat Kings netminder Jiri Patera before the clock ran out. Patera stopped 35 of 38 shots faced in the contest while Søgaard turned aside 15 of the Wheat Kings’ 18 shots he faced.

The Orange and Black are 32-15-1-1 and they will host the Prince Albert Raiders on Wednesday night at the Canalta Centre before travelling to Brandon for a rematch Friday. Wednesday’s game will be brought to you by the Canadian Mental Health Association. Tickets for the game can be purchased in person at the Canalta Centre Box Office or online.