TIGERS FALL 5-3 TO THE WHEAT KINGS IN GAME THREE 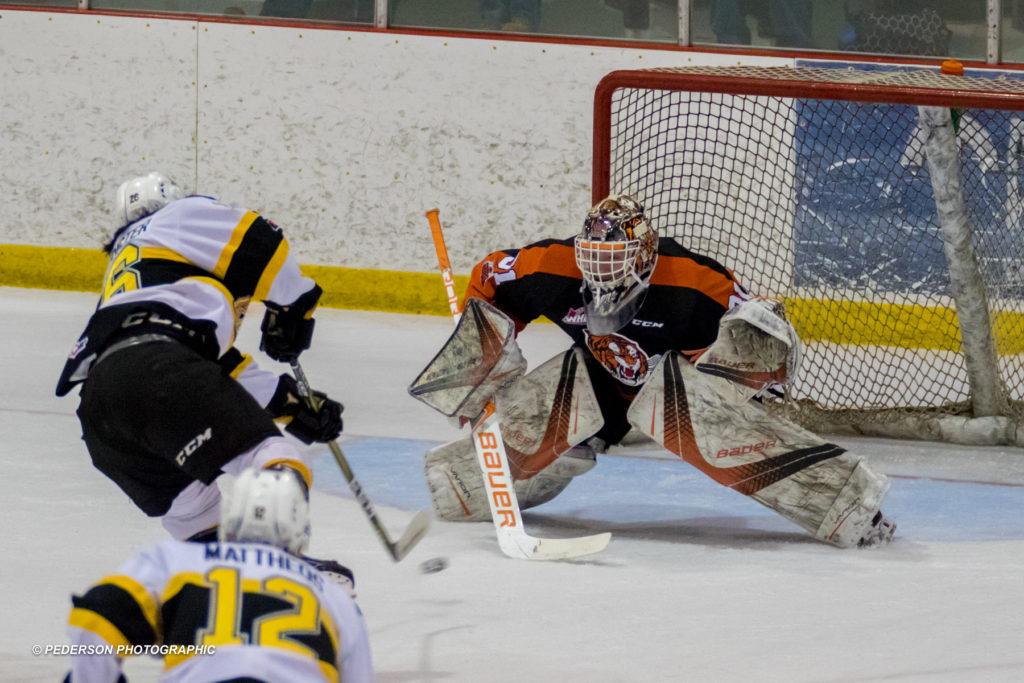 The Medicine Hat Tigers fell 5-3 to the Brandon Wheat Kings in game three of the Eastern Conference Quarter Final.

Tabbies captured the lead early in the first period when Captain Mark Rassell scored on an odd man rush. Bryan Lockner and David Quenneville assisted on the play.

After his penalty expired Wheat King Linden McCorrister received a pass and flew in on Tigers goaltender Jordan Hollett, but Hollett stood tall making a huge save on the Wheat Kings’ breakaway.

Shortly after, Wheat Kings forward Ty Lewis tied the game up after winning possession in the Tigers’ end. The teams headed to the dressing room with a 1-1 stalemate.

Brandon earned their first lead of the series when Connor Gutenberg fired in a wrister early in the second stanza.

Midway through the period, Cole Clayton and Jaeger White combined before Gary Haden scored to tie the game back up at 2 a piece.

White regained the lead for the Tigers early in the final frame by redirecting a shot on the power play. Quenneville and Rassell picked up the assists on the play.

Wheat Kings Ben McCartney scored on an individual effort forty-two seconds later to bring the game back to a stalemate before teammate Evan Weinger scored to regain the lead for the Wheat Kings.

Late in the third period, Lewis scored his second of the night to seal the victory for the Wheat Kings.

Hollett turned aside 28 of the Wheat Kings’ 33 shots and left the net with less than two minutes remaining in the game to give the Tabbies an extra attacker. Unfortunately, the Orange and Black were unable to capitalize.

Tigers lead the series 2-1 , game four will be played tomorrow night in Dauphin, MB, and it will start at 6:30 PM.

Game Five will be played in Medicine Hat at the Canalta Centre on Friday, March 30th at 7:30 PM. Tickets go on sale Wednesday, March 28th at 9:00 AM.