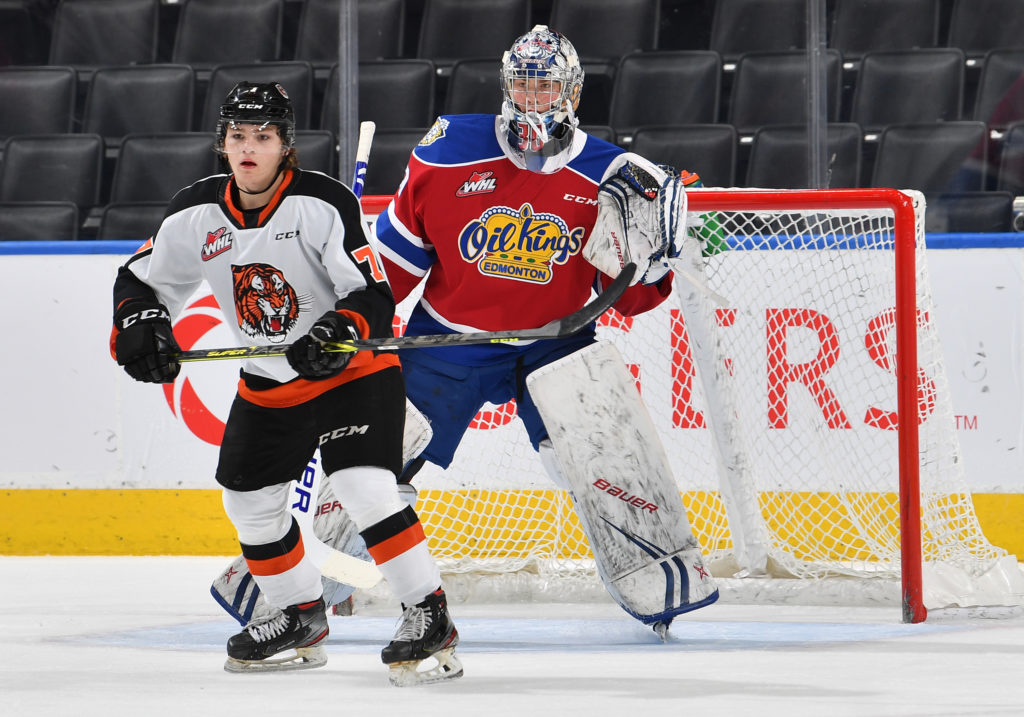 The Tigers headed to Edmonton on Saturday night to take on the Oil Kings. Edmonton has been off to a hot start (5-2-0-1) and is currently ranked 4th in the CHL’s Top 10 list. The Tigers got the best of the Oil Kings in their previous meeting though, winning 3-2 in a shootout in Medicine Hat.

The Oil Kings struck first early in the opening frame. Carson Latimer tipped in Braeden Wynne’s shot for his third of the season. The Tigers would respond before the end of the period while on the power play. Ashton Ferster redirected Noah Danielson’s shot from the slot for his first career WHL goal. Lukas Svejkovsky recorded his 100th career point with the secondary assist. The game wouldn’t remain tied for long though. The Oil Kings would put another goal on the board with only 35 seconds remaining in the period. Ethan Peter threw the puck on net and Jacob Boucher deflected it for his fourth goal.

Luke Prokop made it a two goal game less than a minute into the second with a seeing eye shot from the goal line. Jaylen Luypen and Jaxsen Wiebe picked up the assists on the goal.

Latimer put the Oil Kings up three with his second of the night 5:17 into the final frame. He put the loose puck home from the side of the goal after a few attempts. Despite being down the Tigers kept battling hard and their persistence paid off when Svejkovsky scored his league leading 8th of the season. He deflected Daniel Baker’s wrister from the point past Kolby Hay to make it a 4-2 game. Corson Hopwo picked up the secondary assist on the goal. The Oil Kings power play unit reinstated their three goal lead a couple of minutes later. Luypen found  Dylan Guenther alone on the left side of the ice and he wristed home his third of the season. Carter Souch picked up his third assist of the night on the goal. The back and forth period continued with Dru Krebs scoring his first with a wrister through a crowd. Tyler MacKenzie picked up the lone assist on the goal. Hopwo would cut the lead to one late in the period with his third. He battled hard front of the net and put a spinning backhand five hole. Reid Andreson and Dru Krebs grabbed the assists on the goal. Unfortunately for the Tigers this would be as close as they would get as the game would end in a 5-4 victory of the Oil Kings.

Garin Bjorklund got the start in net for the Tigers. He was busy throughout the game and made 35 saves on 40 shots.

The Tigers’ next game is Friday, October 29th when the Tigers travel to Moose Jaw to take on the Warriors at Mosiac Place. Game time is 7:00 (MST) and can be heard live on CHAT 94.5 FM at tigershockey.com or watched via webcast at watch.chl.ca.