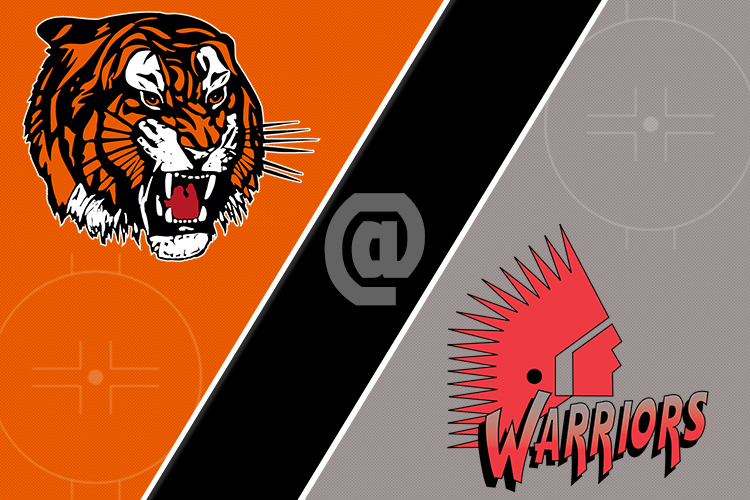 Medicine Hat, AB — The Orange and Black traveled east to Moose Jaw to take on the Warriors for game 3 of the 2017-18 pre-season. Medicine Hat was coming into this game riding a 2 game winning streak, earning back to back wins over the Lethbridge Hurricanes. The Warriors came into tonight’s action sporting a 2-1 record with wins over the Regina Pats and the Swift Current Broncos. Duncan McGovern would get his first start between the pipes for the Tigers, at the other end it would be Adam Evanoff for the Warriors. The Tigers were without a few key forwards for tonight’s contest, as Mason Shaw, David Quenneville, Zach Fischer, Max Gerlach, Mark Rassell and James Hamblin are all attending NHL training camps.

In the first period, it was a tight checking defensive battle, as both teams would have limited scoring opportunities. McGovern and Evanoff would both finish the frame making 9 saves apiece. The chemistry between German import Mick Kohler and Josh Williams would continue in Moose Jaw as Kohler would find Williams for his 5th goal of the pre-season to give the Tigers a 1 goal lead, midway into the first frame. Moose Jaw would draw a power play to try and even the score, but the Tigers penalty kill came up big, holding on to the one goal lead after one.

The Warriors would get one past the Tigers net-minder  3:39 into the 2nd period, as Tate Popple set up Tanner Jeannot for his first marker of the pre-season. Duncan McGovern would exit the game with 9:38 left in the 2nd making 13/14 saves, rookie goaltender Kaeden Lane would come in to replace McGovern.  Moose Jaw’s offense would take over, as they would score a pair of goals before the end of the frame. Daemon Hunt and Tate Popple would beat Lane, with the Warriors taking a 2 goal lead into the break.

The Tigers would get to within one just 1:46 into the 3rd as Henry Rybinski would get his 4th assist of the pre-season setting up Jaxon Steele for his first to make it at a 3-2 game. The Warriors offense would continue to surge as they would score 3 goals in just under 5 minutes, as Moose Jaw would hand the Tigers their first loss of the pre-season by a score of 6-2.