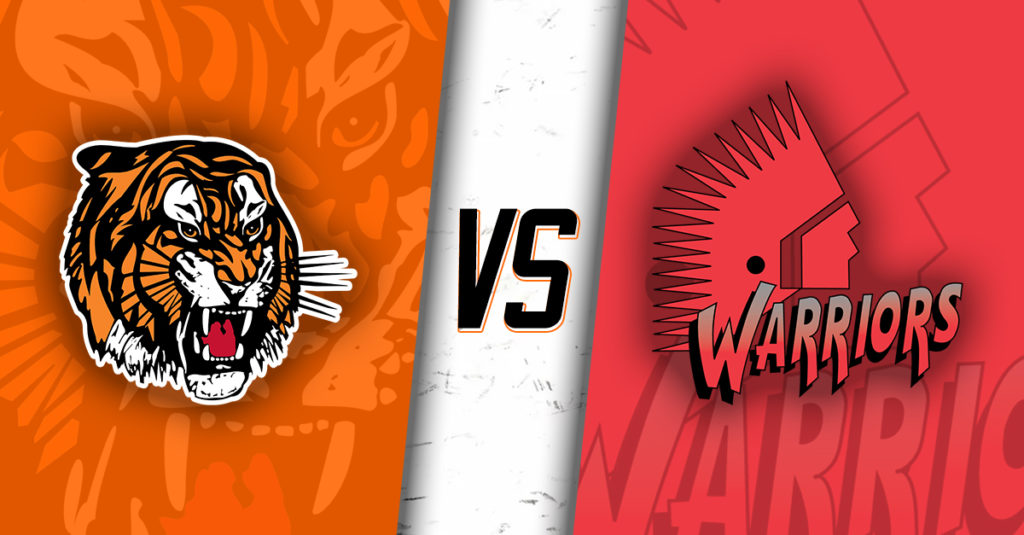 The Tigers started off a busy weekend with a quick trip to Moose Jaw to take on the Warriors. It was the third meeting between the two clubs this season. The previous games went to overtime with the Warriors sneaking away with victories in both.

The Warriors opened the scoring early in the first period. Brayden Yager one timed his 17th of the season off a feed from Jagger Firkus only 1:35 into the opening frame. The two teams traded chances throughout the period but it we wouldn’t see another goal till just before the end of the period. The Tigers evened up the score before the intermission when Carter Chorney scored his first as a Tiger. The Warriors couldn’t clear the puck and the Owen MacNeil found Ashton Ferster down low on the left side. Ferster could have taken the shot but found Chorney streaking down on the right wing with a great pass that he tapped in.

The Warriors took the lead in the second period with a pair of goals midway during the frame. 7:25 into the period, Eric Alarie found Robert Baco in front of the net with a cross crease pass that he was able to tap just under Beckett Langkow’s pad. The same line struck again a few minutes later off a faceoff. Ryder Korczak won the puck to Alarie who faked a shot and found Baco with a great pass that he was able to tap in for this seventh of the season and second of the period.

The Warriors kept pressuring offensively in the third period. Brayden Yager made it 4-1 when he scored his second of the game just over four minutes in. Jagger Firkus threw the puck to the front of the net from the corner and Yager batted the puck off a bounce into the back of the net. Five minutes later, Robert Baco made it a four goal game when he scored his hat trick goal while shorthanded. Baco grabbed the puck on the left wing and unfortunately the Tigers defender was slowed down by the referee. Baco cut hard to the net and outwaited the goaltender for his eighth of the season. The Warriors would add another just before the 15 minute mark. Eric Alarie entered into the offensive zone and let a snapshot go that found the blocker side of the net for his 10th of the season to make it a 6-1 game. The Tigers would put another goal on the board before the end of the period. Bogdans Hodass kept the puck in the offensive zone and fed the puck across to Rhett Parsons. Parsons skated in and let a wrister go from the right circle for his second goal of the season. Teague Patton picked up the secondary assist on the goal.

The Tigers’ next game is Saturday, January 15th when the Tigers host the Lethbridge Hurricanes at Co-op Place. Game time is 7:00 (MST) and tickets are available online at tixx.ca.