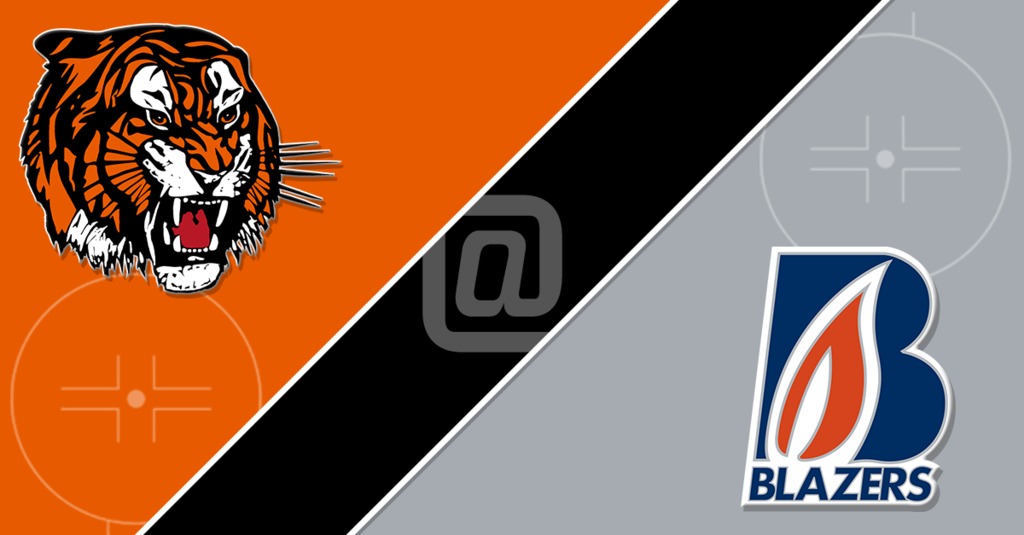 The Medicine Hat Tigers were unable to ride a hot start to victory on Friday night at the Sandman Centre. The Kamloops Blazers rallied for four unanswered goals to erase an early 3-1 deficit and secure their third consecutive victory while knocking the Tigers off a two-game surge with a 6-3 win.
Tigers winger Ryan Jevne opened the scoring just over a minute into action with his fourth goal in the last three games. The 19-year-old Edmonton product finished off a give-and-go play with defenceman Kristians Rubins by ripping a sharp-angle shot past Blazers goaltender Dylan Ferguson after an aggressive forecheck held the zone.
While the Blazers knotted the game up when Garrett Pilon forced a costly turnover in the Tigers zone and fired the puck over netminder Jordan Hollett, the stalemate was once again short lived. Cam MacPhee was credited with his first career goal after throwing a puck through traffic and watching it careen into the net just 12 seconds after Pilon’s marker, then Tigers captain Mark Rassell joined the scoring party a few minutes later by creating a breakaway and beating Ferguson on the glove side to extend his point streak to eight games with his 24th goal of the year.
While the goal pushed Medicine Hat to a 3-1 lead with their fifth shot of the game, the Blazers refused to go down without a fight. Defenceman Luke Zazula jumped into the attack and beat Hollett on a goalmouth scramble late in the opening frame to keep Kamloops within striking distance at the end of 20 minutes, then winger Jermaine Loewen redirected a point shot past Hollett early in the second to draw even.
Justin Sigrist looked to give the Blazers their first lead of the night a few minutes later when he deflected a puck through Hollett’s legs. While a review determined the puck was knocked down with a high stick and the goal did not stand, the Blazers continued to push and Nick Chyzowski — older brother of Tigers centre Ryan Chyzowski — broke through on a similar play with three seconds left in the middle frame to take an edge into the dressing room.
The Blazers tacked on early in the third with Max Gerlach in the box for elbowing. Chyzowski won the ensuing draw then Pilon bounced a shot off a Tigers defenceman and into the net for his second goal of the night.
While Medicine Hat pushed for an opening with 14 shots in the third period, Pilon completed the hat trick with an empty-netter and Ferguson locked up the 34-save victory to push the Blazers to 10-13-0-0 on the year.
Hollett settled for the 43-save loss, dropping Medicine Hat to 15-8-0-0. Tigers forwards Gary Haden and Max Gerlach both had five-game point streaks snapped in the setback.
The Tigers close out their four-game road trip Saturday in Kelowna against the Rockets (12-8-2-1) at 8:05 p.m.