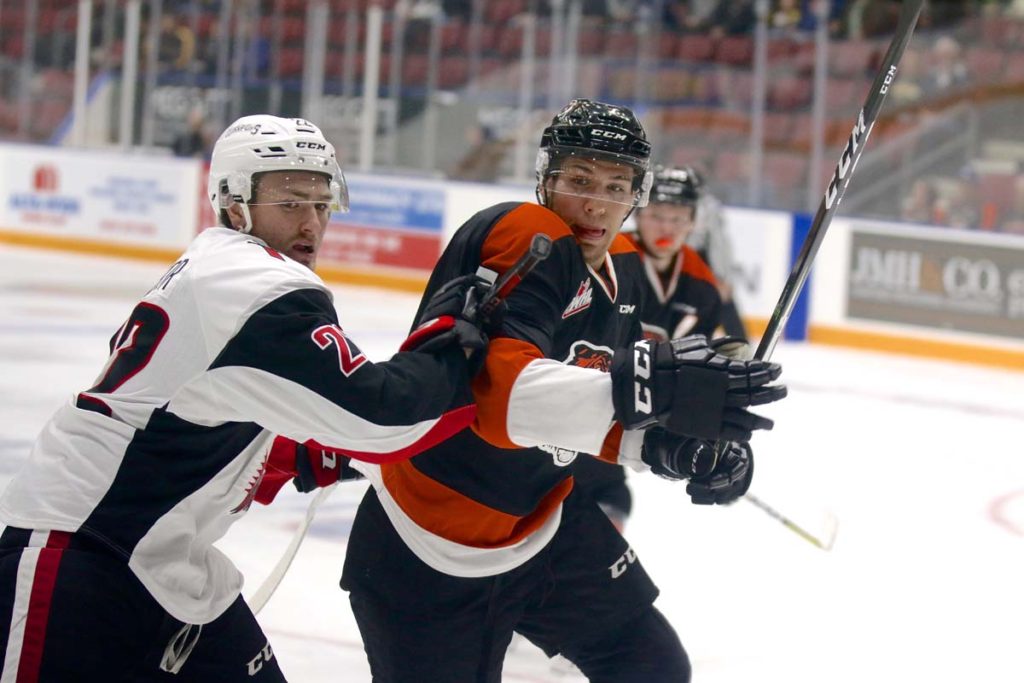 Moose Jaw, SK — Saturday night was once again another playoff battle as the Tigers visited the well rested Moose Jaw Warriors. The Warriors had been sitting waiting for the Tigers to roll in from Regina having not played since Wednesday, a 4-3 win over Calgary to extend their winning streak. Medicine Hat was coming off another playoff style matchup in Regina 24 hours prior and looked to also extend their modest 4 game winning streak. The clubs traded goals throughout the game but ended up falling in the dying minutes and have their streak snapped.

The Tigers got into an early hole in Moose Jaw, similar to their start in Regina. Yan Khomenko, who scored when these teams last played a few weeks ago, got the Warriors on the board first. Michael Bullion was in goal for the Tigers, making his 4th straight start and was sensational in this game. Bullion despite giving up the early goal would hunker down and control the game for the Tigers as it could’ve gotten worse for Medicine Hat. Moose Jaw extended their lead on a Thomas Foster marker to give the home side a 2-0 lead. But 6 seconds later the Tigers and Steven Owre scored to cut into the lead 2-1. Then just under a minute later John Dahlstrom scored his 26th of the season and all of a sudden we were tied at 2 heading to the intermission.

The second period was a hard nosed grinding period as both teams played cautiously not wanting to have the next goal against them. Medicine Hat had their chances but it was Bullion would would once again steal the show. Bullion robbed the Warriors multiple times to keep the Tigers in the game. Moose Jaw had the most offensive zone time against the Tigers than other team over the past 10 games in this one as they hemmed the Tigers in on several occasions. The lone goal in the period went to Dahlstrom who scored his 2nd of the night and 27th of the season to put the Tigers ahead 3-2 heading to the 3rd intermission.

The third period was just as cautious as the second with both teams playing good defensive hockey. Sawchenko and Bullion were good in net but someone had to give. The Warriors and Noah Gregor, who missed the last meeting between these clubs, buried his 22nd of the season on a back door play to tie things up at 3. The atmosphere tightened as the fans in attendance knew the next shot mattered. Bullion turned aside multiple good chances from the Warriors but couldn’t solve Tanner Jeannot. Jeannot attempted a wrap around which was stopped by Bullion, but the rebound went right back to him and he found the smallest hole and gave the Warriors a 4-3 lead with only 146 remaining in the game.

Medicine Hat would pull the goalie but couldn’t find the equalizer as the Warriors buried their 5th goal into an empty net and sealed a 5-3 victory.

Medicine Hat is back in action against the Kootenay Ice on Tuesday as the Tigers are back home for 4 of their last 6 games of the season.