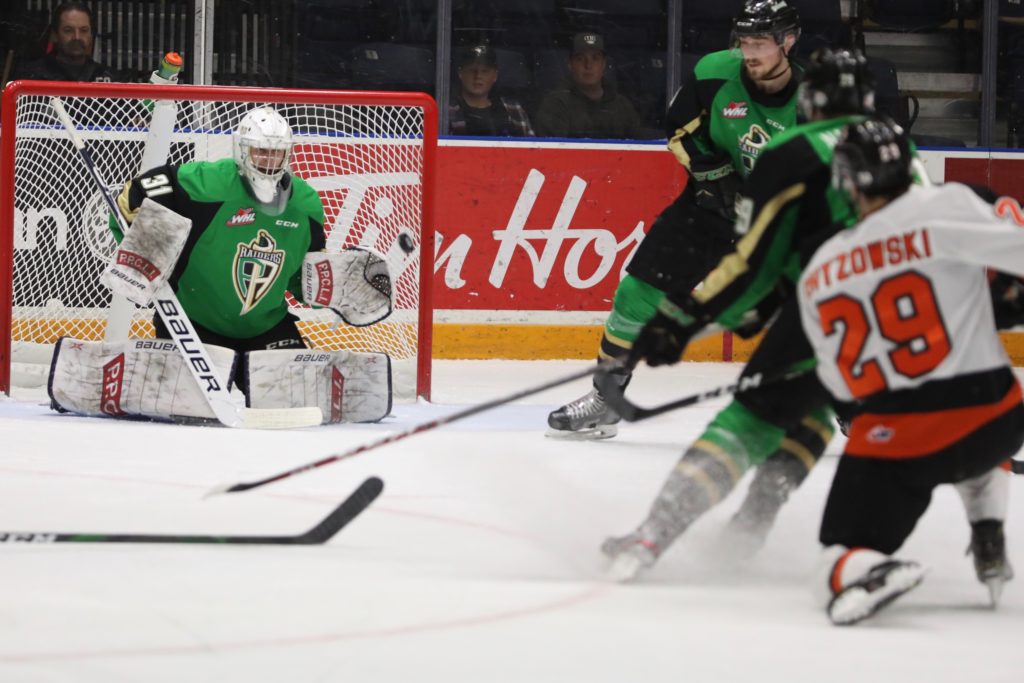 Medicine Hat, AB — The Medicine Hat Tigers lost a 4-3 heartbreaker in overtime to the Prince Albert Raiders on Wednesday night.

With seven seconds left in regulation, the Raiders scored to tie the game up and send it to extra time. In overtime, they carried the momentum from the third period to score early to defeat the Tabbies. In their season series, the Orange and Black went 3-0-1-0 against the Raiders.

It was a tight contest all game starting in the first period when Baxter Anderson fired the puck on net from the neutral zone to score his fourth goal of the season and give the home team an early lead. Just over a minute later, Daniil Stepanov responded for the Raiders to keep the game at a stalemate.

In the second stanza, Nick McCarry scored his first of the night on a play from Parker Gavlas and Bryan Lockner to once again take the lead for the Tabbies. But the Raiders responded just over four minutes later when Justin Nachbaur’s bouncing puck found its way past goaltender Garin Bjorklund.

With less than five minutes remaining in the game, McCarry scored his second of the night and 11th of the season on a beautiful passing play from Cole Clayton and Ryan Chyzowski.

Unfortunately for the Orange and Black, Aliaksei Protas scored his first of the night with seven seconds remaining to force overtime and then quickly scored in overtime to take the game for the Raiders.

Bjorklund stopped 18 of 22 shots faced in the contest while Max Paddock turned aside 30 of the Tigers’ 33 shots.

Medicine Hat is 32-15-2-1 and they will travel to Manitoba for a two game road trip this weekend. Friday they will play the Brandon Wheat Kings before battling the Winnipeg ICE on Saturday. The Tabbies’ next home game will be Tuesday, February 11th when they host the Regina Pats. Tickets for Tuesday’s game can be purchased at the Canalta Centre Box Office or online.