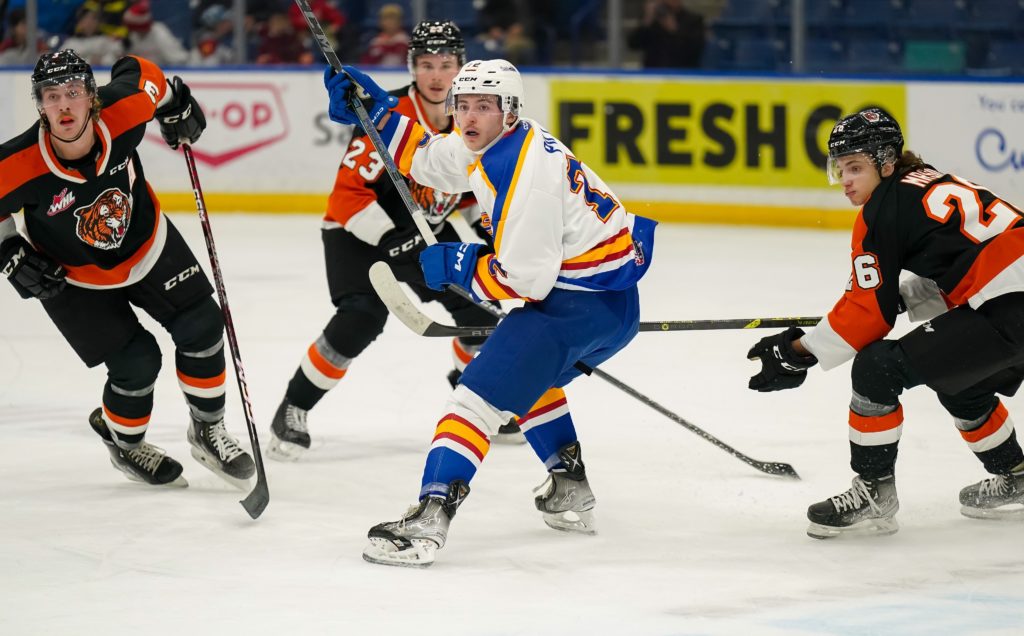 Saskatoon, SK – The Medicine Hat Tigers worked from all angles leading, tied and trailed the Saskatoon Blades before falling in overtime 4-3 Friday night at SaskTel Centre.

The tightly defended match-up between the Tigers and the 9th ranked team in the CHL would remain scoreless in the first period before Tigers Forward Andrew Basha (Calgary, AB) would score from Brenden Lee (Seaatle, WA) & Cayden Lindstrom (Chetwynd, BC) at 6:11 into the 2nd frame. Basha increased his point streak to six games with the goal and Lee kept his point streak up to four games.

Saskatoon would tie the game just 41 seconds later as Vaughn Watterodt would score to make 1-1, the Blades would follow-up with their first lead of the game as Misha Volotovskii would score on a contested breakaway to give Saskatoon a 2-1 advantage. But the Tigers wouldn’t go down in the 2nd as Tyler MacKenzie (Red Deer, AB) creatively bounces a dump-in late in the second period and Brayden Boehm (Nanaimo, BC) in his 100th WHL game would tie the game at 2-2 at 17:42 to create an intriguing period three.

In the final period just 1:27 in, Saskatoon would score on the power play thanks to Brandon Lisowsky’s one time shot beating starter Beckett Langkow (Vegreville, AB). But on their 5th man advantage of the night, Brenden Lee would get his 11th of the season and 8th power play goal on the 2022-23 campaign to tie the game at 3-3. Wiesblatt & Saskatoon product Reid Andresen would draw assists.

Both the Blades and Tigers would get chances to win in regulation but for the 5th time this season the Tigers would head to the extra frame.

Egor Sidorov would end things unfortunately too quick for Saskatoon just 1:11 into overtime giving the Blades the win and improving their record to 15-4. While Tigers do get a point in their 4th straight game and have 6 points in their last 4 games, now sporting a 6-9-4-1 record and sit one point back of Swift Current for 4th in the Central Division.

Medicine Hat would finish 1/5 on the power play and 2/3 on the penalty kill while Beckett Langkow made 21 saves in the loss.

Next up for the Tigers is a jaunt up to Prince Albert to battle the Raiders Saturday night, you can catch the game on the Voice of the Tigers WILD 94.5 & on the CHL TV App on the away feed starting with the Pre-Game Show at 5:45 and puckdrop at 6PM. 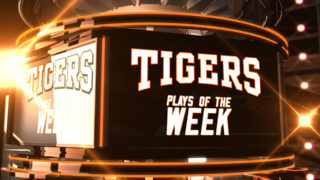 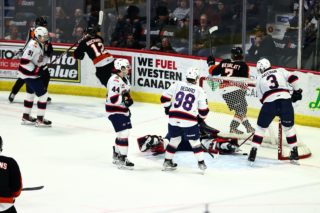 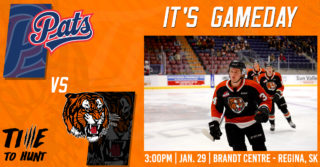 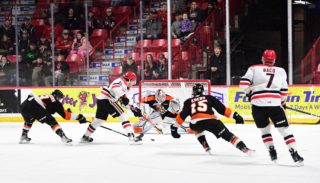 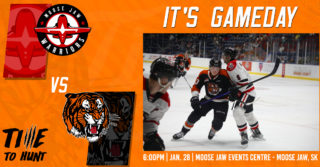