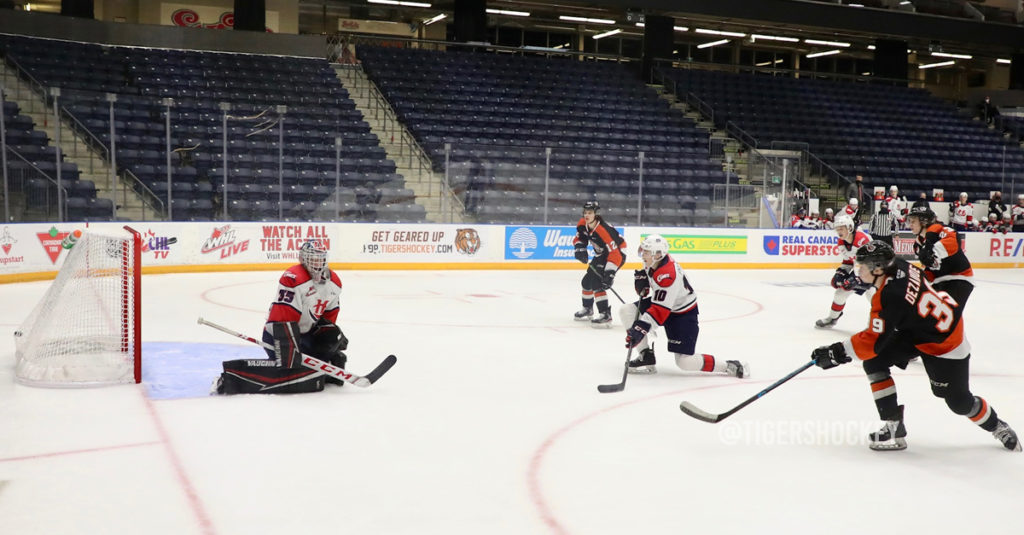 Medicine Hat, AB —  The highway 3 rivalry continues with the 2nd game of a 3 game series.  After a decisive win by the Tigers on Thursday night, the Hurricanes will be looking to take the win tonight.  Beckett Langkow and Carl Tetachuk will be the starting goaltenders.

There was a lot of back and forth action to start the game.  Brett Kemp, with his exceptional speed,  was instrumental in a Lethbridge penalty and  Easton Kovacs was sent to the box for tripping.  The Tigers were able to get some quality shots but couldn’t put the puck past Tetachuk. Oasiz Wiesblatt took a high sticking penalty at the 13:57 mark, and the Hurricanes made no mistake when Logan Barlage got his 8th of the season and made it a 1 – 0 game.  Tempers would flare and there was a scrum in the corner. McCarry was given a roughing penalty and the ‘Canes would strike again, with Cole Miller getting his 1st career WHL goal.  Shots on goal were 7 to 6 in the Hurricanes favour.

The Tigers needed to pick up the momentum in the 2nd period, as Lethbridge really stepped up their game.  The ‘Canes got their 3rd power play of the game when Aiden Brook took a holding penalty and just over 3 minutes later Brook took another penalty for elbowing.  The Tigers were able to kill both of the penalties but when the teams were back at even strength, Alex Thacker ripped the puck past Langkow with his 3rd of the season.  The Bengals did reply with a goal from Teague Patton, which was his 2nd of the season.  The physicality of the game was ever increasing, and the Tigers put on the pressure, but Tetachuk was solid.  At 17:24 of the 2nd period, Alex Cotton received a slashing penalty and the Tigers gave it their best effort but again could not get it past the Lethbridge netminder.

Offensive play really needed to improve for the Tigers in the 3rd.  Lethbridge was doing a great job of slowing Medicine Hat down and using their size to their advantage.  That was evident when Dino Kambeitz scored his 6th of the season from a sharp angled shot.  At 6:21 Cole Clayton was sent to the penalty box for a hit to the head.  Chase Wheatcroft took full advantage and scored his 6th of the season on a beautiful setup from Alex Cotton and Justin Hall.  Just a little over 2 minutes later, Corson Hopwo beat Tetachuk on a quick shot and it seemed to give the Tigers new life.  Carlin Dezainde then notched his 1st career WHL goal on an impressive unassisted effort.  A Hurricanes penalty for tripping would give the Tigers another chance at a goal but they were not able to connect. Beckett Langkow left the net to give the Tigers another attacker, but the gamble did not pay off as Chase Wheatcroft was able to score an empty netter.  The Tigers ran out of time and it was the Lethbridge Hurricanes who would win their 1st game of the season against the Tigers. Final score was 6-3.

The scheduled game in Lethbridge tomorrow night should be an outstanding tilt.  Puck drop will be 7:00 pm.