TIGERS FALL TO HITMEN IN SHOOTOUT 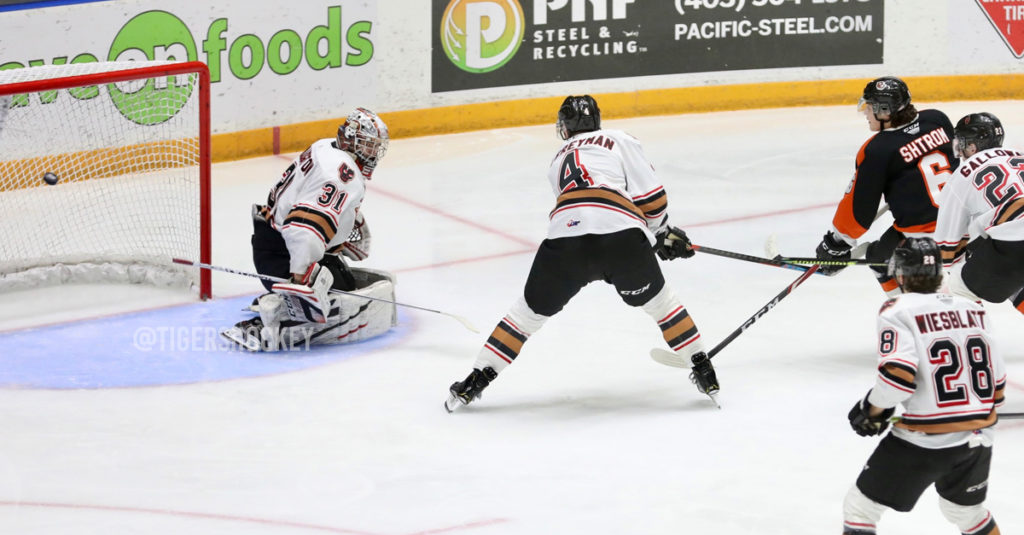 Medicine Hat, AB — This will be the last game of the season between Calgary and Medicine Hat.  The Hitmen are hoping to take one game out of the three this weekend but the Tigers are hoping for a sweep.

Jack McNaughton was between the pipes for Calgary and Garin Bjorklund was in the net for the Tigers. Tschigerl scored his 5th of the season, at 7:46 of the 1st period with a nice passing play that found its way past Bjorklund.  The Tigers replied 2 minutes later when Corson Hopwo made a great move in front of the net and beat McNaughton for his 10th of the season.  Corson Hopwo has now garnered points in his last 6 games in a row.  There was some good end to end action in the latter part of the period, with a little bit of everything thrown in.  Both teams were trying to play disciplined hockey and as a result, there were no penalties in the 1st.

The Tigers started the 2nd trying to match the Hitmen’s physicality.  Tempers were getting a little heated as both teams battled for dominance.  The first penalty of the game went to Calgary’s Rory Neill for hooking and less than a minute later Cael Zimmerman would go off for slashing.  The Tigers successful power play kicked in and Brett Kemp got his 8th of the season with a one timer from Cole Clayton.  Carlin Dezainde would take his first WHL penalty for slashing and the Hitmen desperately tried to even the score.  The penalty expired and a minute later Calgary’s Cael Zimmerman picked up a rebound and slammed it home.  Tempers flared at the end of the period in a very tight game.

Two Tigers were off in the penalty box to start the 3rd; both for roughing.  Calgary was able to connect on the power play for the first time in this series and for the first time this season. Minutes later Oren Shtrom would retaliate on a highlight goal.  The Hitmen came right back with Tschigerl’s 6th of the season.  Both teams were now playing in high gear.  Then the Hitmen took another penalty, and Oren Shtrom got his 2nd of the night after being left all alone in front of the net.  The Tigers were assessed one more penalty before the end of the period, but the Hitmen couldn’t connect.  With a 4-4 score, it will go to overtime.

The teams were pretty evenly matched and both had good quality shots, but overtime solved nothing as both goaltenders needed to be sharp. It was a tight game, with both the Hitmen and Tigers giving it their all.

The Hitmen were victorious in the shootout, as Riley Stotts would get the game winner by a score of 2-1.