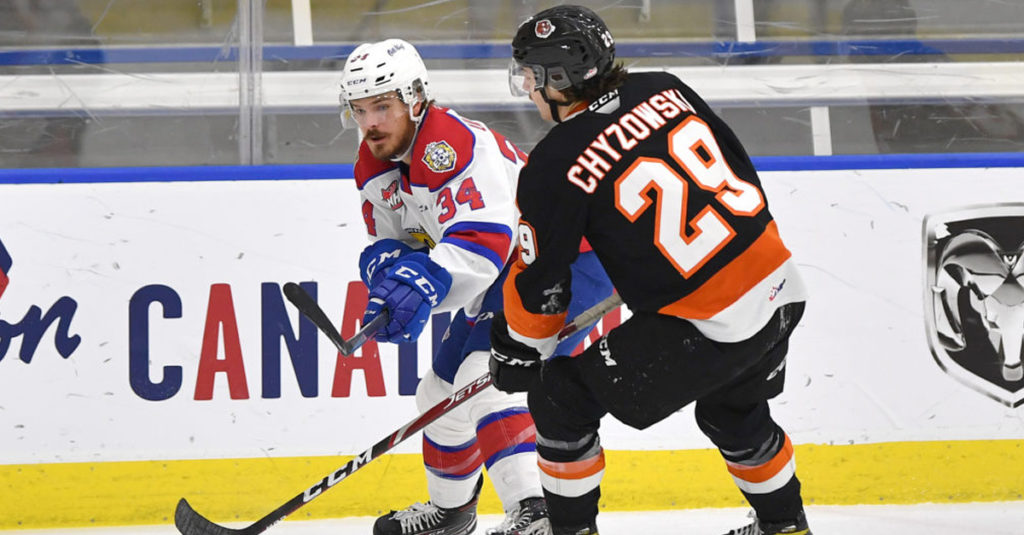 Medicine Hat, AB — The Medicine Hat Tigers were on the road again as they travelled to Edmonton to take on the Oil Kings in the final game of this three game weekend series. Garin Bjorklund starts in net for the Tigers after having faced 96 shots through the first two games, and Colby Knight gets the nod for the Oil Kings. With the win tonight the Oil Kings can clinch the Central Division, but the Tabbies are hoping to play spoilers.

Both goalies were tested early with the best chance going to Lukas Svejkovsky but Knight kept it scoreless. Jalen Luypen breaks the deadlock 4:04 seconds in to the 1st period as he beat Bjorklund on the wrap around. 1-0 Oil Kings. Svejkovsky would get another chance moments later on a breakaway but Knight had the angle covered. The Tigers had a pair of chances as Nick McCarry was stoned on a 2 on 1 by Knight, then moments later Brett Kemp beat the Oil Kings netminder, but couldn’t beat the iron. Eric Van Impe also got the puck past Knight, but again the Tigers struck iron as the Oil Kings stay ahead 1-0. Colby Knight again stymied Nick MCarry with two more great pad saves with about 90 ticks on clock.

The 2nd period starts much the same way the first finished, with both teams getting chances early. At 6:29 of the period Josh Williams got 12th of the year finding the loose puck in a goal mouth scramble, putting the Oil Kings up by 2. Jake Neighbours and Blake Heward had the assists on the play. Nick McCarry got the last touch as the puck squeaked past Colby Knight for his 6th of the campaign to bring the Orange and Black to within 1. Daniel Baker and Cole Clayton had the helpers on the McCarry marker. Tigers keep up the pressure late in the 2nd but are unable to get the equalizer.

Tigers get a man advantage early in the 3rd as Ethan Peters gets called for holding, but the Oil Kings got the first chance as Liam Keeler gets in alone on Bjorklund, but Bjorklund shuts him down to keep the Tigers within striking distance. Lukas Svejkovsky dangles the Oil King defender and rips the shot passed Colby Knight to tie the game up at 2. That goal comes on the powerplay with Brett Kemp and Cole Clayton getting the assists. Corson Hopwo got called for a phantom slashing call and just as the powerplay expired Jalen Luypen got his 2nd of the game to give the Oil Kings the lead with only 5 minutes to go in the game. The Tigers did their best muster a last minute rally, but were unable to claw back into this one as the Oil Kings win by a score of 3-2.