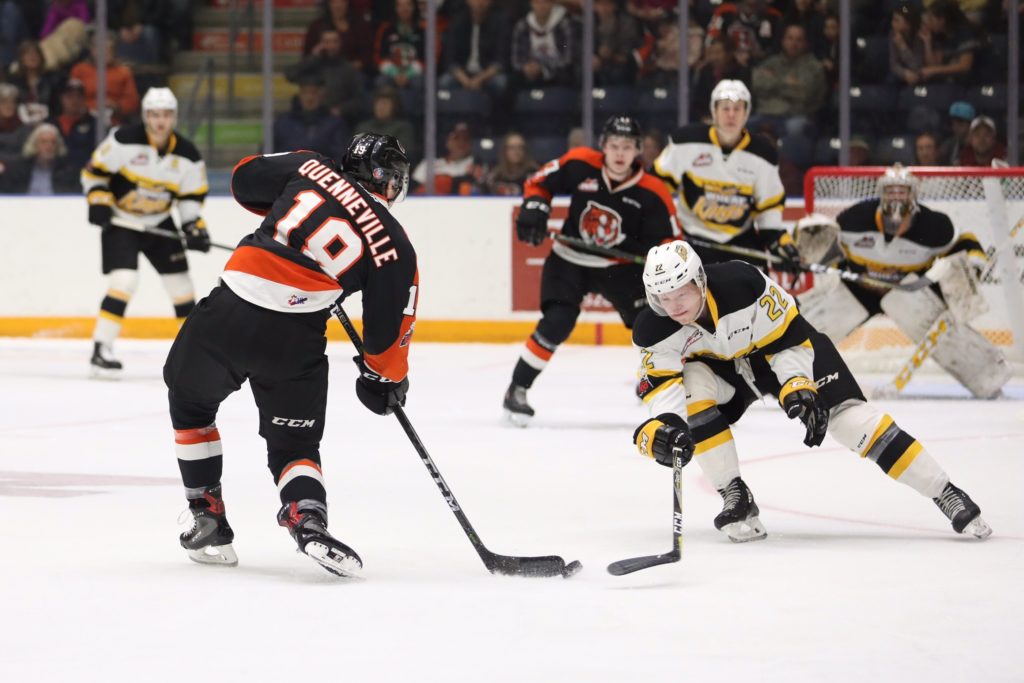 It took longer than he would have liked, but Medicine Hat Tigers defenceman David Quenneville sent the stuffed animals flying in Saturday’s Teddy Bear Toss tilt against the Brandon Wheat Kings.

Ryan Jevne hit two posts and Mark Rassell rang another off the crossbar in the early going to leave the 3,502 in the stands begging for a red light — but Quenneville finally answered the call on a late power play to make it rain teddy bears at the Canalta Centre. While the Tigers didn’t get the result they wanted in an eventual 5-4 overtime setback, Quenneville says there’s no tarnishing the joy of watching the teddies fly.

“These teddies go to a great cause and it means a lot to the kids, so to be able to score this one, it’s really fun,” said Quenneville. “I don’t think we could have hit more posts or crossbars or edges of pads. I think mine was a little bit greasy, but off a great pass from Max (Gerlach) and I wouldn’t want the teddy bears to drop any other way.”

While Wheat Kings winger Evan Weinger gave the visitors an early lead with his 11th goal of the season, the Tigers answered back 15 minutes later with the coveted Teddy Bear Toss marker to bring a premature end to the period.

Both teams entered the dressing room after 16 minutes of action and returned to finish the frame on a fresh sheet of ice before changing ends and immediately starting the second.

Wheaties captain Tanner Kaspick took advantage of the early intermission and put his team back in front with a snipe off the rush in the dying seconds of the first, but Jaeger White responded just over three minutes into the second to tie the game back up with a tap-in goal.

Ryan Chyzowski gave Medicine Hat their first lead of the night with just over four minutes left in the middle frame. After forcing an offensive zone turnover, the 17-year-old centre beat Wheaties goaltender Logan Thompson clean from the low circle for his 10th of the season.

Tyler Preziuso kept the offence rolling into the final minute of the middle frame. The Victoria product broke in on a 2-on-1 with Jevne and opted to shoot, beating Thompson over the blocker to give Medicine Hat some breathing room at the break.

But Brandon narrowed the lead back to one early in the third period when Baron Thompson put a puck on net and watched it pinball its way across the line. The bad bounces continued later in the frame when Stelio Mattheos got just enough of a bouncing puck to beat Bullion and force overtime.

While the Tigers took 1:24 of power play time into sudden death, the Wheat Kings killed it off before Mattheos beat Bullion with a 3-on-1 chance to hand Medicine Hat their first overtime loss of the year.

Medicine Hat’s first-round bantam draft pick Garin Bjorklund was called on to serve as an affiliate backup for Bullion with Jordan Hollett listed as day-to-day after taking a knee to the head in Friday’s win over the Victoria Royals.

The Tigers hit the road for a four-game East Division trip starting Tuesday in Moose Jaw against the Warriors (21-5-1-1). Hollett is expected to join the team on the road.