TIGERS FIGHT BACK BUT FALL 6-5 IN OVERTIME 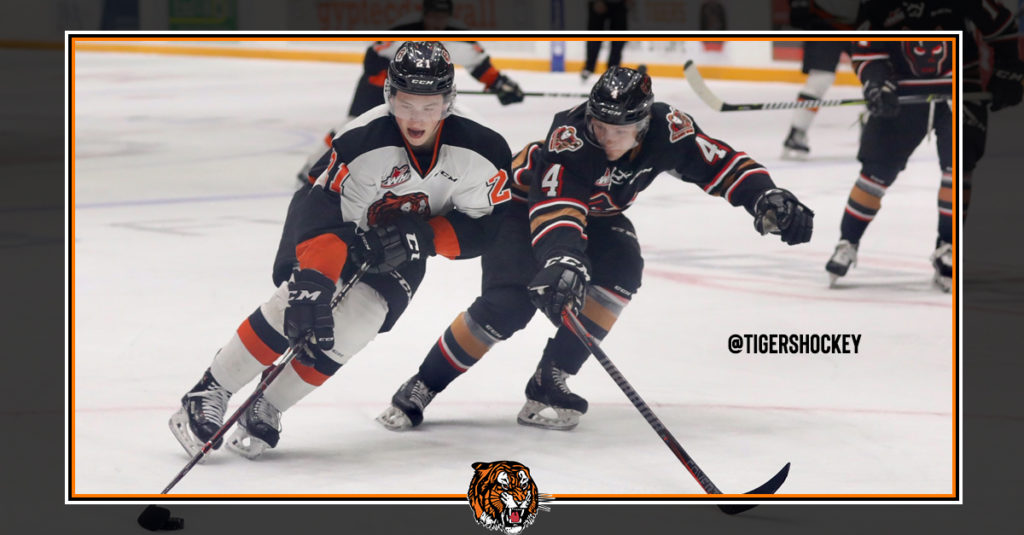 Medicine Hat, AB — The Medicine Hat Tigers came back from a 4-1 deficit at the end of the first period to fall 6-5 in overtime to the Calgary Hitmen.

Vladislav Yeryomenko scored 3:41 into overtime to win the game for the Hitmen but it was a hard fought battle.

Hitmen forward Corson Focht scored a hat trick in the first period with two of his goals coming on the power play. James Malm also scored a power play in the opening frame.

Midway through the period on a rush up ice, Nick McCarry fed Ryan Chyzowski the puck and Chyzowski scored to get the Tigers on the scoreboard. Chyzowski’s 23rd goal of the season was also assisted by Trevor Longo.

Early into the second stanza, Ryan Jevne scored on a play from Brett Kemp. Kemp’s assist was his 100th career WHL point.

Midway through the period, Corson Hopwo scored to make it a 4-3 hockey game. Hopwo’s 6th goal of the season was assisted by James Hamblin and Longo.

The tenacious Tigers continued to push in the third period and Longo scored to tie the game up with 12:02 remaining in regulation. Jevne and Chyzowski combined on Longo’s 5th goal of the season.

Shortly after Longo’s goal, Jevne scored his second of the night on the power play to gain the Tigers’ first lead of the night. Jevne’s 28th goal of the season was assisted by Linus Nassen and Hamblin.

Late in the period, Malm scored his second of the night to send the game into extra time.