TIGERS FIGHT, BUT FALL 7-4 TO LETHBRIDGE 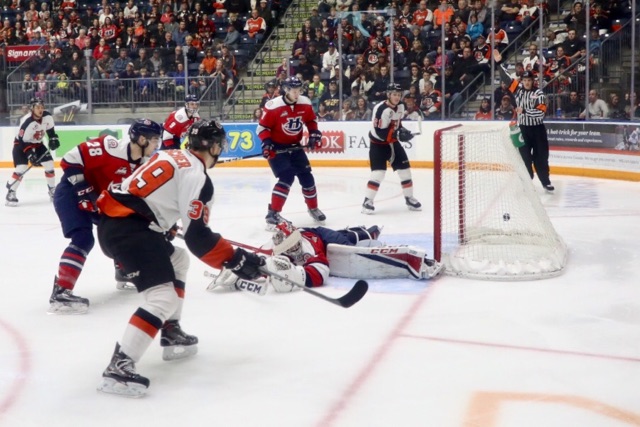 Medicine Hat, AB — It felt like a rivarly again at the Canalta Centre Saturday night. Game 2 of the Eastern Conference Semi-Final was a doozy for fans, broadcasters and even players and coaches. Momentum swings, close chances and lots of goals were in the cards, leading to the visiting Lethbridge Hurricanes tying the best of 7 series at 1 game a piece with a 7-4 win.

Before the hundreds of people lined up outside could enter the building or the few people still getting a hot dog, the Tigers would open the scoring. Zach Fischer found a loose puck driving the net and potted his 5th of the post season past Skinner. It was a much needed goal for Medicine Hat to play with the lead early. Fischer and his line of Steven Owre and Chad Butcher would connect just 2 minutes later as Fischer potted his 2nd of the night and 6th of the playoffs. It had seemed the game shifted to a landslide for Medicine Hat. However, just as quickly as they got the lead, it vanished. The pesky Hurricanes broke out for 2 consecutive goals before the midway point in the frame. Giorgio Estephan scored the first of three on the night and Alec Baer netted his third 27 seconds apart to tie things up at 2.

The scoring wasn’t done in the frame as a back and forth affair continued. Ryan Jevne rifled home his 2nd of the playoffs on a power play. The Tigers received a 4 minute advantage after Hurricanes Brennan Menell speared Matt Bradley in the abdomen. Before the period ended Tyler Wong found his name on the scoresheet as the Canes leading playoff scorer potted his 6th and once again we were tied at 3 heading into the break.

After everyone in attendance took a breath, the second period would begin. The fast paced, up and down game fans saw in the opening period was gone as both clubs played more defensive. Pucks were bouncing, space seemed limited and chances were few and far in between. When there was a chance the goaltenders would scoop up any loose pucks or defenseman would bury their opponent to the ice with a hard check, preventing any rebounds to find the back of the net. James Hamblin would be the first to crack and defensive mold with his 1st of the playoffs. Hamblin tipped in a Max Gerlach wrist shot. The play was initially reviewed but held up and gave the Tigers a 4-3 lead.

One of the newest additions to the Hurricanes lineup was 15 year old affiliate player Dylan Cozens. Cozens made his impact when he and his linemates caught the Tigers tired after an icing call. Cozens drove the net looking for a loose puck and found one, whacking the puck into the net and a 4-4 game after 2 periods.

The third period was hard nosed and tense. The building was tense with every play, shot or hit. It was a true rivalry final 20 minutes. A miscue for the Tigers would end up putting the Canes on the power play with just under 8 minutes to go in a tie game. Medicine Hat was caught with too many men on the ice. Estephan would cash in on the man advantage with a goal mouth scramble. The Canes forward got to a loose puck before Michael Bullion could and slid it home for a one goal lead. The Tigers pressed and pressed to find the equalizer, even getting a late power play.

Medicine Hat’s man advantage couldn’t find a seam through to the net with Hurricanes all over blocking pucks and taking away shooting lanes. Eventually the Canes would pot two empty net goals, leading to the Tigers ultimate defeat, 7-4 in Game 2.

The series now shifts to Lethbridge on Tuesday and Wednesday before heading back to the Canalta Centre on Friday night.