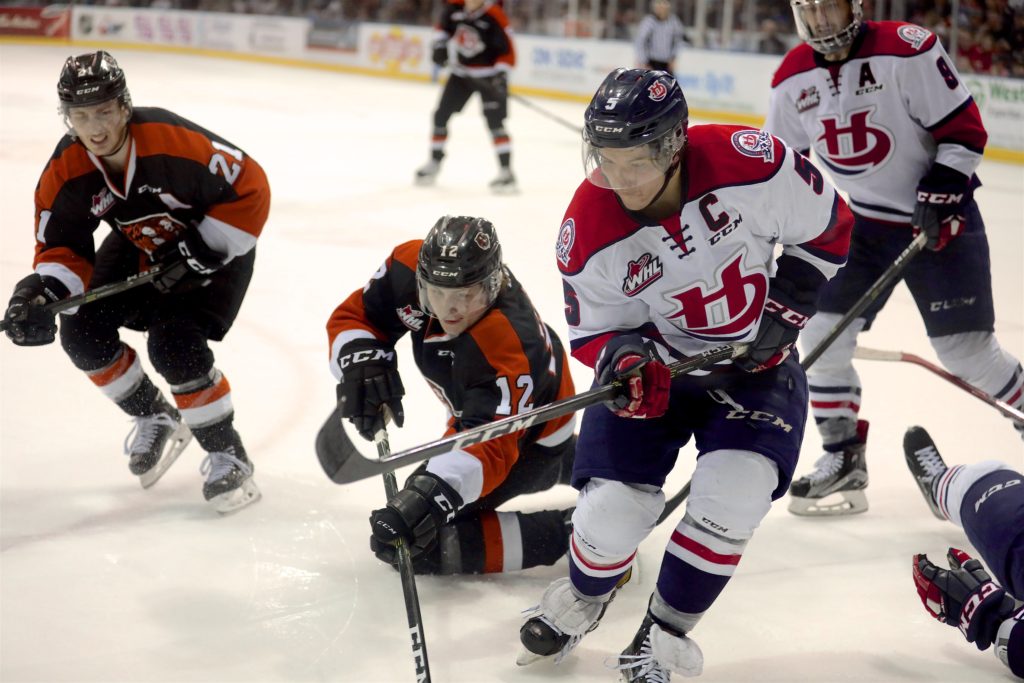 Lethbridge, AB –It was a crucial game for the Medicine Hat Tigers as they were in enemy territory for Game 6, looking to force a critical Game 7 and continue their season. From the beginning the Tigers had the momentum and looked like the better team. A four line attack couldn’t be withheld by the Canes and ultimately the Tigers stamina and skill took over in the final period.

It was a dominating performance by the Tigers in the opening period. Lethbridge would get themselves into penalty trouble as they were called for two penalties on the same play. Babenko and Merezhko were both sent off, one for cross checking and one for checking from behind. Max Gerlach made them pay as he rifled a shot top shelf over the glove of Stuart Skinner and an early 1-0 lead. Four minutes later a broken play in the Tigers end had Babenko score his 5th of the post season on their first shot of the game. Bullion had a similar start in Game 5 but looked to bounce back quickly. But the Tigers power play was on target all night long. Matt Bradley notched his 2nd of the post season and a 2-1 lead. But the Canes answered with a power play goal of their own and once again tied things at 2 heading into the break.

After outshooting the Canes in the first period 15-4, the Tigers continued their dominance. There was lots of good efforts all over the ice including the 4th line of Ryan Jevne and Tyler Preziuso. The duo would be slotted in with the three centers James Hamblin, Chad Butcher and Matt Bradley. In the middle period Medicine Hat would throw 14 shots on Skinner but couldn’t solve the big netminder. While Bullion was solid in net at the other end when called upon, stopping the 9 shots his way in a scoreless period.

In the third period the Tigers began the period the same way they started the game with a power play marker. This time Steven Owre would be the benefactor of a great play from Chad Butcher as the Californian potted his 3rd of the playoffs and gave the Tabbies a crucial one goal lead. Bradley would score his second of the game later in the period and gave the Tigers a big two goal lead heading down the stretch. Lethbridge would try to pull back into the game but their efforts came up short as it looked like they had nothing left in the tank. John Dahlstrom scored into an empty net to seal the game and a trip back to the Canalta Centre for Game 7.

The series shifts to the Canalta Centre for Game 7 Tuesday night.