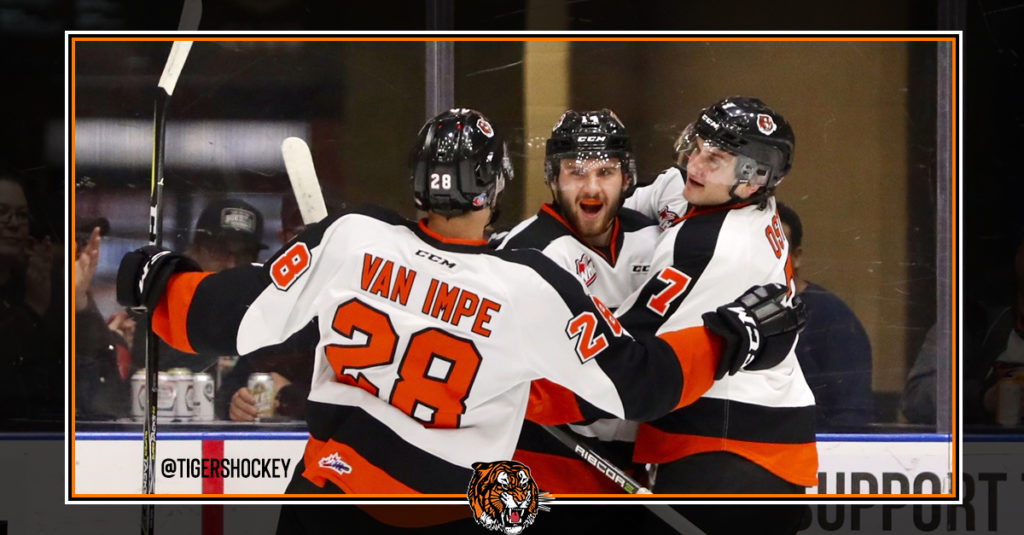 Medicine Hat, AB — The Medicine Hat Tigers defeated the Kootenay ICE 4-1 in their first game back from the holiday break.

Midway through the first period, Hayden Ostir set up Ryan Jevne to rifle in a shot past ICE goaltender Jesse Makaj. Eric Van Impe also assisted on Jevne’s 17th goal of the season.

Early into the second stanza, Josh Williams and Ryan Chyzowski combined on the power play to set up Hamblin and make it a 2-0 hockey game.

With less than a minute to play in the middle frame, veteran ICE defenceman Martin Bodak scored to cut the Tigers’ lead to one.

In the third period, Trevor Longo shot the puck in on Makaj and Hamblin was there to bury the rebound and score his second of the night. Tyler Preziuso also picked up an assist on Hamblin’s 19th goal of the season.

Late in the game, Ostir was called for slashing and while he was in the box, Makaj left the ICE net to give the ICE a 6 on 4 advantage. Chyzowski won the puck in the Tigers’ end and skated it out in the neutral zone before dumping it into the empty to score his 12th goal of the season and make it 4-1. Chyzowski’s goal was scored a second after Ostir’s penalty expired.

The Orange and Black are now 18-15-1-2 and will host the Victoria Royals Saturday night at the Canalta Centre. The game will start at 7:30 PM. ATB Financial is the game sponsor and the Be YOUth Centre will be in the Hut 8 Mining Community Corner.