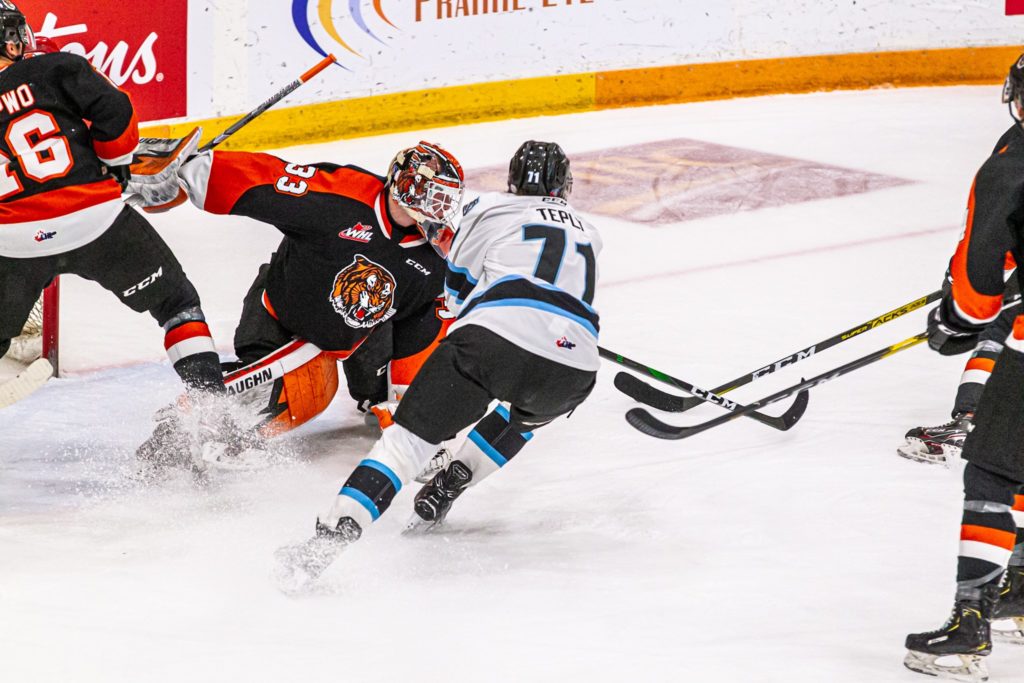 Lukas Svejkovsky had his second two goal night with the Tabbies in the contest while rookie goaltender Garin Bjorklund stopped 34 of 35 shots faced. Bjorklund’s performance earned him the first star of the game and Svejkovsky earned the second star.

Jackson Leppard capitalized on the Winnipeg’s ICE first power play of the night to open the scoring early in the game and give the home team a 1-0 lead.

In the second period, Svejkovsky scored a beautiful goal on the Tigers’ second power play of the night to tie the game up 1-1. Daniel Baker and Jonathan Brinkman assisted on the play

Twenty-two seconds later, Bryan Lockner set up Brinkman to score his ninth goal of the season and take the lead for the Tigers.

During the second stanza, the Tabbies killed off four penalties and went one for two on the power play before heading to the dressing room leading 2-1.

Late in the final frame James Hamblin collected the puck in the Tabbies’ defensive end and rushed up the ice with Svejkovsky in a two on one against Benjamin Zloty of the ICE. Hamblin patiently picked his moment to pass the puck to Svejkovsky who dodged Zloty before beating ICE goaltender Liam Hughes glove side. Svejkovsky’s goal was his 11th of the season.

Twenty-five seconds later Cole Sillinger slipped one past Hughes to seal the 4-1 victory for the Tigers. Baker and Brett Kemp assisted on Sillinger’s 15th goal of the season.

Hughes turned aside 35 of 39 shots faced in the contest and earned the third star of the game.

The Tabbies will return home from their Manitoba road trip with a 26-12-1-1 record. This weekend they will play a home and home series with the Moose Jaw Warriors that will kick off Friday night in Medicine Hat. Tickets for Friday’s game can be purchased in person at the Canalta Centre Box Office or online.