TIGERS GET PAST PESKY ICE 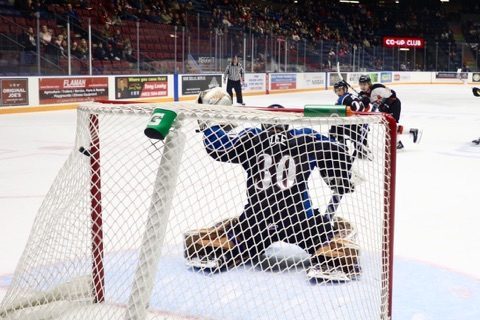 Medicine Hat, AB — It was a rough and tumble night at the Canalta Centre, but the Medicine Hat Tigers came out on top.

John Dahlstrom put a pin in a potential comeback by the Kootenay Ice with his 28th goal of the season then Chad Butcher scored in overtime to shake off a late scare and secure a 4-3 victory on an evening filled with flying fists.

The Tabbies and Ice dropped the mitts on two separate occasions in a tumultuously paced middle frame. Goal scoring enforcer Zach Fischer took exception after being run into the Kootenay bench by Ryan Pouliot and immediately dropped the gloves for a marathon bout that ended in a referee’s stoppage.

A little over six minutes later, the Ice were the ones calling foul after Matt Bradley got into a minor collision with Kootenay goaltender Payton Lee. Dallas Hines stepped up to dish out some justice, but the bout failed to bring about a shift in momentum.

Mark Rassell crept to within two tallies of 100 career points early in the first period with his team-leading 34th goal of the season — and in his 200th career game to boot. The 19-year-old winger redirected a slap pass from David Quenneville past Ice netminder to open the scoring and Tigers goaltender Michael Bullion closed the door with nine saves in the first to preserve a lead at the break.

Clayton Kirichenko tacked on to the Tiger lead midway through the second period, beating Lee clean over the left shoulder for his 12th goal of the season. Jordan Henderson continued his red-hot start to March with an assist on the goal, his fifth point in three games. The 19-year-old blueliner went on to add a pair of pivotal shot blocks on a second-period penalty kill.

The Ice finally got on the board early in the third period when forward Brett Davis deflected a Vince Loschiavo point shot past Bullion for his 18th goal of the year and the floodgates opened up.

Colton Kroeker beat Bullion on a breakaway just five minutes later to bring the game back to even. The Ice continued to pressure Bullion in the ensuing minutes and Loschiavo broke through for his third point of the period to steal away the lead. But the Tigers dug in their heels, Dahlstrom drew even then Butcher scored the overtime winner to send Medicine Hat’s 3,030 fans in attendance home happy.

Tigers goaltender Nick Schneider was scheduled to get his first start since defeating the Calgary Hitmen 5-4 on Feb. 24, though illness forced him out of the contest just prior to puck drop. The 19-year-old Calgary Flames prospect took shots during warm up, but Bullion took to the blue paint for the national anthem.

Bullion went on to turn aside 24 pucks — including a goal line stop on a Tanner Sidaway breakaway in the second — for his fourth win in five straight starts, pushing the Tigers to within five points of triple digits with a 47-19-1-0 record.

Most of the Tigers took the ice sporting “pride tape” on their blades for Tuesday’s contest. The rainbow coloured stick tape was showcased in an attempt to foster social change and an inclusive sports community as part of the Hockey is for Everyone initiative. The NHL has also promoted the initiative, with February having been dubbed Hockey is for Everyone month by the league.

The Tigers return to the Canalta Centre Friday to host the Edmonton Oil Kings at 7:30 p.m.