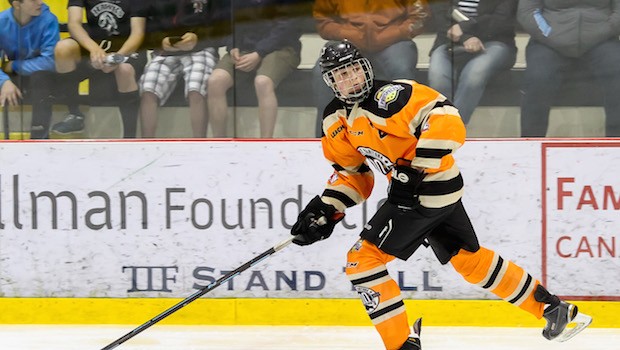 The 6-foot-1, 178-pound Langley, B.C. native was selected fifth overall by the Medicine Hat Tigers with the team’s highest draft pick in more than a decade, and while his eyes were fixed on the screen, the sound of his mother’s elation was all he could hear.

“I didn’t even hear my name being called. When he said, ‘Langley, B.C.’ my mom screamed so loud I couldn’t hear my name,” said Williams. “It feels amazing.”

Tigers head coach and general manager Shaun Clouston says the Tabbies have had their eye on Williams for some time, and his name was still on their list when they took the clock.

“We haven’t had a pick at that point in the draft since I’ve been here, that’s for sure, so we feel real excited about being able to draft Josh today,” said Clouston. “He’s got great wheels, great hands, a great shot. He plays a physical, gritty game. He’s going to be a real good player for us. His stats tell you that too, he put up big numbers.”

Williams averaged 2.4 points per game with the Yale bantam prep team this season, finding the back of the net 35 times in 25 games while adding 24 assists in the process. His performance earned him the title ofCanadian School Sport Hockey League most valuable player and top scorer.

The 15-year-old was also named to all-star teams at multiple tournaments this season.

“We started off slow this year but as the season went on we got better,” said Williams, adding he’s had plenty of positive responses from his Yale teammates after the big announcement.

Williams added he is thrilled to join the ranks of a storied WHL organization like the Tigers, and considering he’s the highest draft pick in recent memory, he knows he’ll have some high expectations to fulfill.

“It’s an unbelievable organization,” he said. “I’m completely honoured just to be drafted by them, but in a couple years now I’ve got to make the team and hopefully be a big part of the organization for the future years.”

The Tigers also selected Edmonton’s Daniel Baker and Vancouver’s Henry Rybinski in the second round, at 28th and 34th overall, respectively. Baker, a 6-foot-2, 175-pound defenceman, registered 20 goals and 21 assists in 32 with the Canadian Athletic Club bantams this season, as well as 82 penalty minutes.Rybinski is coming off a season with the Burnaby Winter Club bantam squad, where he recorded a staggering 44 goals and 75 assists in 59 games.

While the Tigers have traditionally boasted a small and quick roster, Clouston says Thursday’s series of decisions to draft bigger-bodied players came both as a result of the scouting, and due to the evolving nature of the game.

“The scouting staff did a tremendous job and we were just going off the list. When it’s our turn to pick, we’re picking the best guy on the list,” he said. “The thing that’s changing a little bit is we want to be able to be a fast team and play at a high tempo, a lot of the big guys are real good skaters now too. Even the bigger guys can really fly. You’ll see that in a guy like Josh.”

The Tigers went on to select Mattie Boonstra in the fourth round at 72nd overall. The 5-foot-10, 139-pound blueliner posted 38 points in 32 games with the Eastman Selects this season. In the fifth round Medicine Hat opted for 6-foot-4 goaltender Kaleb McEachern, at 94th overall. Centre Corson Hopwo had his name called by Medicine Hat in the seventh round, 138th overall, after posting a point per game with the Delta Academy bantam prep squad, and 5-foot-9, 150-pound forward Logan Ganie rounded things out at 182nd overall.

Williams, Baker, Rybinski and the rest of Medicine Hat’s newest recruits will make the trip to the Gas City on May 27 for the team’s annual orientation camp.

“I’ve never been to Medicine Hat so I’m looking forward to getting out there,” said Williams. “Meet the coaching staff, meet my teammates and just get to know the city.”