TIGERS GRIND OUT 6-4 VICTORY OVER BRANDON 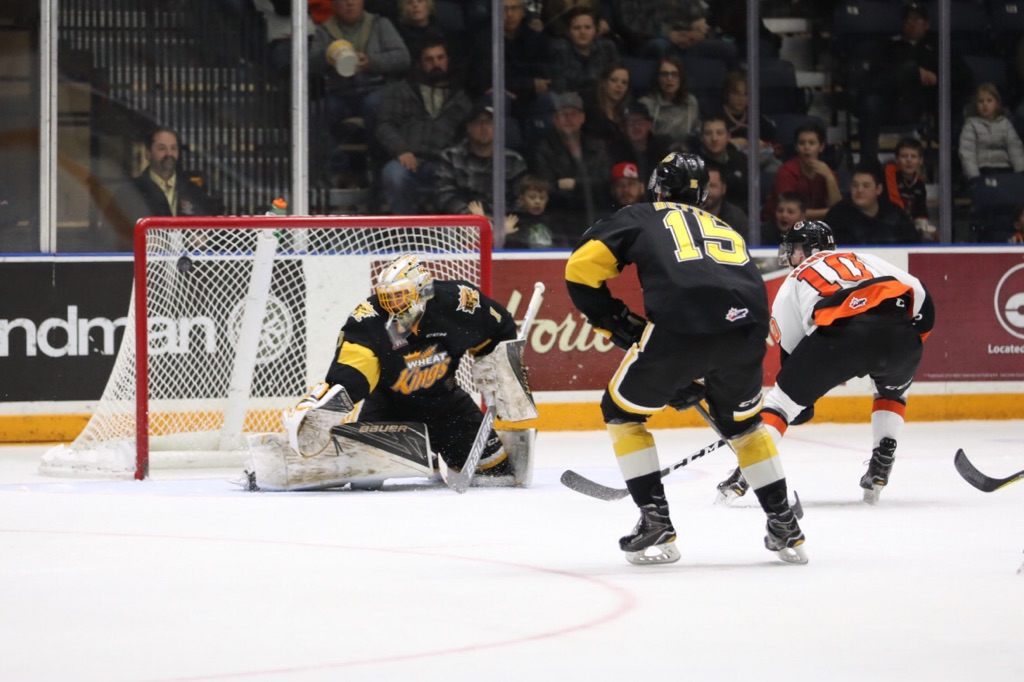 Medicine Hat, AB — Saturday night proved to be a potential first round playoff match up as the Tigers hosted the Brandon Wheat Kings. A rematch from a week ago where the Wheaties seemed to have their way with Medicine Hat in a 5-2 victory, this Saturday the Tigers wanted to continue their winning streak moving into 2 crucial games next week against Kootenay.

The game started with an old fashioned tone as Zach Fischer and Schael Higson decided to drop the mitts to make sure everyone in attendance was awake. Fischer and Higson traded hands with each competitor landing some big punches, squaring off at centre ice. With the fight over the tone was set, this was going to be a dog fight to the bitter end. Mason Shaw then buried his 18th goal of the season just a minute and half after the fight. The opening period was physical as Brandon tried to take advantage of the smaller Tigers. Brandon also had the advantage of not playing Friday night, compared to the Tigers who had a good battle with the Oil Kings. After 20 minutes the Tigers lead on the lone goal from Shaw.

Once the first period was over the game opened up a bit more with 4 goals being scored in the middle frame making it a even back and forth game. Connor Gutenberg scored his 11th of the season past Michael Bullion to tie the game. Just past the midway point of the period Ty Lewis netted his 23rd of the year. But this time the Tigers had a quick response with a streaking James Hamblin was sent on a breakaway by Tyler Preziuso and went top shelf to tie the game back up. Hamblin was injured earlier in the game after a late hit sent the Tigers forward crashing into the boards. Hamblin ended up needing stitches above his left eye and made his return just in time. Be fore the period ended Ryan Jevne scored his 7th of the year as John Dahlstrom drove the net a Wheat Kings defender tripped up goaltender Logan Thompson, causing the 19 year old to stumble and leave Jevne with a wide open net. Medicine Hat did however lose a key piece to their team in the game as Mason Shaw was hit with an errand skate to the face, causing the forward to leave and not return.

Matt Bradley got the third period started on the right foot with his 21st of the season on a power play. Bradley was streaking down the left wing and went top shelf on a screened Thompson. However not just 14 seconds later as the Tigers goal was still being announced Tanner Kaspick stole the puck from a Tigers defender and buried his 16th of the year to cut into the Tigers lead. The game continued to be a battle as Brandon was playing a man short on forward with stars Nolan Patrick and Stelio Mattheos gone to Quebec for the CHL Top Prospects Game. The resilient Tigers were patient and took advantage of their chances. Chad Butcher had a good game for Medicine Hat and was rewarded with his 22nd of the season. Butcher went around the top of the offensive zone before firing a shot top shelf on Thompson, a crucial goal at that junction of the game. Brandon would pull the goalie in exchange for the extra attacker but Ryan Jevne out muscled a Wheat King defender and potted his 8th and second of the night into the yawning cage, taking home the Tigers 3rd straight win along with it.

Medicine Hat gets a few days off before playing 4 games in 5 days as they open the week with a home and home series with the Kootenay Ice before travelling south of the border to take on Spokane and Tri-City next weekend.